BAGHDAD, July 9, 2008 – If you asked Army Lt. Gen. Lloyd J. Austin in April which cities in Iraq were the hot spots and would be the focus of his forces’ efforts, he would have replied quickly: Basra, Mosul, Diyala and Baghdad’s Sadr City district.

But when reporters asked the commander of Multinational Corps Iraq about those same cities today during a media roundtable at Al Faw Palace here, his reply was quite different.

Today, the Iraqi government is “firmly in control of Baghdad, Basra and Mosul,” Austin said. “We’ve made some significant gains here in terms of security, and we hope that we can continue to build upon those.”

Coalition forces in Anbar province are in the process of handing over full control to the central government as well, he added.

A major reason for this change is the progression of Iraqi security forces, the general said. Since late March, when major operations began in northern, central and southern Iraq, violence and attack levels in the country have dipped to the lowest point in four years.

Attack levels are down more than 90 percent during the past year. And as Iraqi army and police units continue to mature, the coalition and Iraqi government have been able to shift more focus toward central services and other issues affecting Iraqis, according to military officials in Baghdad.

“Our efforts in conjunction with the efforts of the Iraqi security forces have been significant in reducing the number of attacks throughout the country,” Austin said. “[Iraqi security forces] have collected up a number of caches, and they’ve also conducted operations in Basra and Amarah. And as we watch that unfold, we see them take out a tremendous amount of lethal accelerants off the battlefield.”

Austin said he’s pleased with his force’s hard work, but continues to focus against finishing the fight with al-Qaida in the north and efforts against Iranian-backed “special groups criminals” in the south.

“We know that al-Qaida is a very resilient enemy, and I think we have to continue to keep the pressure on the remnants of its organization,” he said. “We also know that special groups criminal elements have left the country and have gone to Iran and other places with the intent to come back at some point. There is work to be done yet.”

Since Austin took the reins of Multinational Corps Iraq in February, the coalition’s “footprint has decreased over time,” he said. The last of the five surge brigades – the 3rd Infantry Division’s 2nd Brigade Combat Team – goes home at the end of this month, and more than 300 troops scheduled to deploy less than a month ago were turned around. Their deployment was canceled due to the recent improvements here, Austin said.

Ground commanders now are working in expanded battle spaces with fewer troops than they had a year ago. Austin said his force has been able to operate in this capacity because of the way leaders have directed their assets and manpower, including Iraqi forces improvements.

As security maintains progress, coalition forces have the opportunity to shift more of their efforts toward central services for the Iraqi people, the general said.

“We have a long way to go, but we’re here to help ensure the Iraqi security forces provide sustainable security that’s going to allow the government to continue to grow and allow the economy to flourish,” he said. 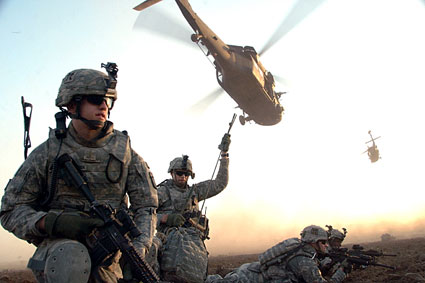