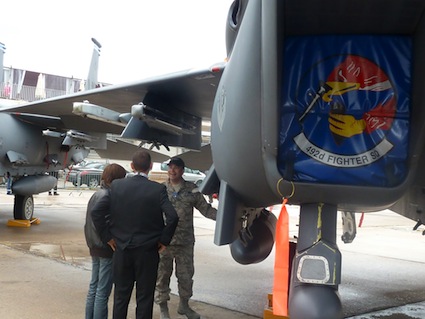 U.S. military pride, strength and technology are on display at the 49th International Paris Air Show at the Le Bourget Airport here June 20 through 26.

Held every two years, the Paris Air Show provides an opportunity for the U.S. to showcase the best the Department of Defense has to offer in people, aircraft, equipment and training on an international stage.

Various models of U.S. military aircraft and equipment and approximately 100 aircrew and support personnel from bases in Europe and the U.S. are supporting this event.

“We are also showing what we do every day for the Defense Department and Department of Homeland Security,” said the colonel, who is the U.S. air boss for this event. “With that, we are building our relations with other countries and services by explaining how we conduct our business. I think one of the best ways to do this is by showing it off in person with the iron and people on the ramp.”

Aircraft on static display at the show include the Air Force’s F-15E Strike Eagle, F-16 Fighting Falcon, C-130J Super Hercules and C-17 Globemaster III; the Army’s RQ-7 Shadow unmanned aerial vehicle; and the Marine Corps’ AH-1Z Zulu and UH-1Y Yankee. Additionally, the Air Force’s C-5M Super Galaxy, the Army’s CH-47F Chinook and the MQ-9 Predator B (Guardian) unmanned aircraft system, operated by the U.S. Customs and Border Protection and the U.S. Coast Guard for the Department of Homeland Security, are making a first appearance at the Paris Air Show.

“Our presence at the Paris Air Show gives us the chance to showcase the capabilities of the Super Galaxy since this is the first time it’s been here,” said Master Sgt. Brandon Trolinder, a 9th Airlift Squadron C-5M Super Galaxy flight engineer from Dover Air Force Base, Del. “We’re sharing the latest version of this aircraft with our international aviation community and industry leaders.”

Colonel Uribe added that the presence of all these aircraft at the show helps promote the military’s ties with NATO and other international partners and demonstrates to a large audience that U.S. industry is producing the type of equipment that will be critical to the success of current and future military operations.

People who stop by the U.S. aircraft corral have the opportunity to see all the aircraft up close, officials said. Each service member is ready to tell visitors about the aircraft they fly and maintain.

For the Super Galaxy, Sergeant Trolinder said the common response he hears is that the C-5 “is huge and it’s amazing that this thing can fly.”

“Most people I talked to were surprised that we can carry troops and cargo at the same time,” Sergeant Trolinder said. “I’m very lucky and honored to be able to represent the United States in an international setting.”

The size and scale of the Paris Air Show is probably what makes this event stand out from other overseas air shows in which the U.S. participates, Colonel Uribe said.