The U.S. Navy has declared BAE Systems’ Advanced Precision Kill Weapon System ready to enter production. The decision, known as “Milestone C,” signifies that the APKWS development program has met its objectives and the system is ready to enter low-rate initial production.

APKWS, developed by BAE Systems in partnership with the U.S. government, provides aviators with a highly precise weapon that is effective against soft and lightly armored targets while minimizing collateral damage — important in urban areas and other situations in which non-combatants or friendly forces are near hostile targets. The U.S. Marine Corps will initially deploy APKWS from AH-1W Cobra helicopters.

Prior to being declared production-ready, APKWS underwent a rigorous series of flight, component, and all-up-round qualification tests. The flight tests, which culminated in a perfect 8-for-8 score in a series designed and conducted by Marine test pilots, demonstrated that the system’s accuracy exceeds government requirements. Throughout its eight-year history of flight tests, APKWS has hit an average distance from the center of the laser spot of less than 0.75 meters against a government specification of 2 meters.

The weapon system, which transforms standard 2.75-inch unguided rockets to smart, highly precise laser-guided missiles, “is a game-changer for our nation’s warfighters,” said Mike Lewis, vice president and general manager of soldier and vehicle solutions at BAE Systems. “Its demonstrated precision and small warhead mean aviators can prosecute very specific targets from a greater distance without incurring collateral damage. The technology’s low weight compared to other precision-guided munitions is critical to mission success on helicopters operating in high-altitude environments.”

APKWS is a low-cost alternative to other air-launched munitions currently in inventory. Because it uses standard launchers, APKWS requires no platform integration or aircraft modifications, and because it is loaded and fired like a standard 2.75-inch rocket, it requires little additional aviator or ordnance crew training. The mid-body design of its guidance section enables use of existing warheads, fuzes, and rocket motors, enhancing the capability of the existing 100,000-unit inventory of unguided rockets.

APKWS can be fired from any helicopter that can launch 2.75-inch rockets. While the initial platform is the AH-1W Cobra, APKWS also has been successfully demonstrated from a U.S. Army OH-58 Kiowa Warrior.

APKWS is the Program of Record established by the U.S. government to meet warfighter requirements for a laser-guided 2.75-inch rocket. The Navy assumed acquisition executive oversight of the program in 2008 and has fully funded it for production. BAE Systems has been the APKWS prime contractor since 2006. 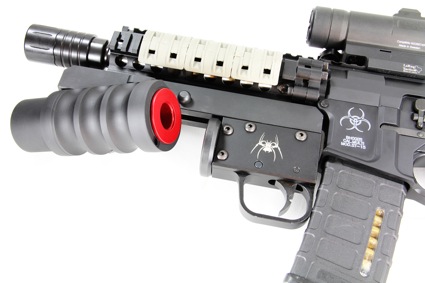