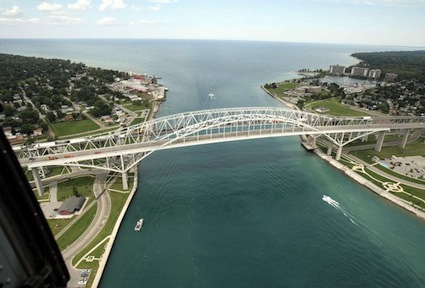 The Bluewater bridge is seen, joining the U.S (L) and Sarnia, Canada, from a U.S. Customs and Border Protection Blackhawk helicopter in Port Huron, Michigan August 6, 2008. The new Great Lakes Air and Marine Branch is set to open August 8 in Michigan adding to border security along the northern U.S. and Canadian borders. REUTERS/Rebecca Cook (UNITED STATES)

The U.S. Border Patrol has quietly stopped its controversial practice of routinely searching buses, trains and airports for illegal immigrants at transportation hubs along the northern border and in the U.S. interior, preventing agents from using what had long been an effective tool for tracking down people here illegally, The Associated Press has learned.

Current and former Border Patrol agents said field offices around America began receiving the order last month — soon after the Obama administration announced that to ease an overburdened immigration system, it would allow many illegal immigrants to remain in the country while it focuses on deporting those who have committed crimes.

Source: Gene Johnson for the Associated Press via MSNBC.

The Bluewater bridge is seen, joining the U.S (L) and Sarnia, Canada, from a…