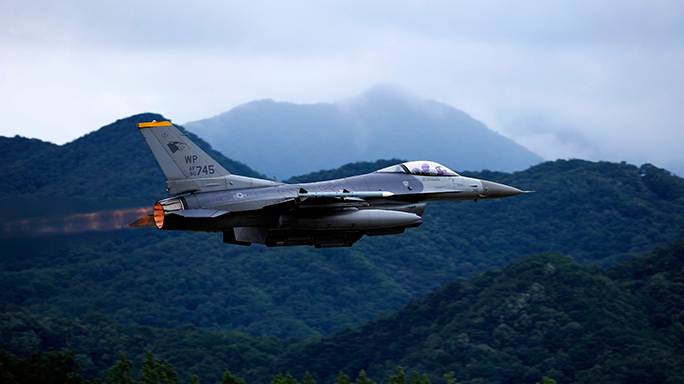 Photo by U.S. Air Force photo/Staff Sgt. Nick Wilson
An F-16 Fighting Falcon from the 80th Fighter Squadron at Kunsan Air Base, South Korea, takes off at Jungwon AB, South Korea, during Buddy Wing 15-6, July 8, 2015. Buddy Wing exercises are conducted multiple times throughout the year to sharpen interoperability between U.S. and South Korean forces so, if the need arises, they are always ready to fight as a combined force.
Comment(s)

Buddy Wing training, held multiple times a year, polishes the ability of South Korea and U.S. pilots to train and operate as a combined force.

“One of the main purposes of Buddy Wing is to participate in tactical discussions,” said South Korean air force Maj. Moonberm Park, a 19th Fighter Wing KF-16 instructor pilot. “This is a very useful opportunity for us to get together during briefings and debriefs to go over details on serious matters and technical subjects.”

“Despite the weather issues, we were still able to be flexible and execute with a larger force of aircraft than we typically train to at Kunsan,” said Capt. Daniel Wynn, the 80th FS assistant director of operations and Buddy Wing 15-6 project officer. “We were also able to provide (the South Korea air force) with valuable training to prepare them for Red Flag-Alaska. So I’d say the training was very successful overall.”

The Buddy Wing training gave South Korean air force members lessons in preparation for Red Flag-Alaska and enhanced their ability to fight in future coalition scenarios alongside the U.S.

“Overall, for a very small force and a small contingent operation out at Jungwon AB, we were able to safely execute our training together, achieve all of our training requirements, learn from one another, and really integrate on that combined level,” Wynn said. “It was a very valuable experience for all of the pilots here.”

The 80th FS pilots were also able to communicate differences in verbiage and build on coordination techniques they use with their South Korean counterparts and ground forces.

“It helps out because if someone doesn’t understand the way some things are said, then we can use a different type of wording and pass that along, which allows us to be more sharply in tune to what’s being communicated while we’re airborne,” said Capt. Michael Arnold, an 80th FS F-16 pilot. “So if we ever have to go to war, then we have a more robust understanding of how we can operate together.”

Getting to know South Korean pilots on a personal level was also instrumental to enhancing communication and understanding each other’s culture.

“We were able to meet with a lot of good pilots and had opportunities to strengthen relationships outside of flying,” Wynn said. “This way, they became more than just another faceless voice on the radio.”

Not only did the Buddy Wing training strengthen relationships, but it also enabled 80th FS pilots to train in unfamiliar airspace.

“There are many differences between the (South Korean) and (U.S.) airspaces,” said South Korean air force Capt. Bonhyuk Koo, a 19th FW KF-16 pilot. “If we don’t have a chance to train together it would be more difficult to understand the differences in flight patterns, tactics and terminologies. I now have a more thorough understanding of why U.S. pilots fly in certain formations.”

Relocating forces to a different airfield, which some of the newer pilots were unfamiliar with, was also a unique experience for younger 80th FS pilots who haven’t had an opportunity to train outside of the Kunsan AB airspace.

“For at least four of our younger wingmen, it was their first time operating at an airfield to which they are not accustomed,” Wynn said. “Despite this challenge, they were still able to execute flawlessly and gain valuable insight from the experience.” 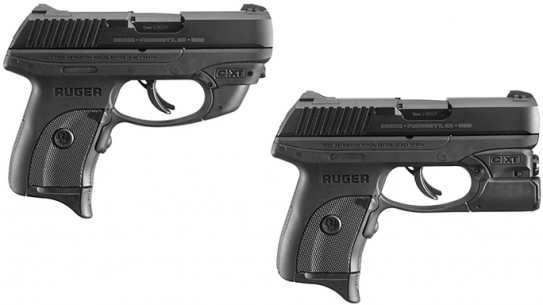 Ruger and Crimson Trace have partnered up to develop a system that allows users...