CIUDAD JUAREZ, Mexico — For the first time, U.S. officials plan to embed American intelligence agents in Mexican law enforcement units to help pursue drug cartel leaders and their hit men operating in the most violent city in Mexico, according to U.S. and Mexican officials.

The increasingly close partnership between the two countries, born of frustration over the exploding death toll in Ciudad Juarez, would place U.S. agents and analysts in a Mexican command center in this border city to share drug intelligence gathered from informants and intercepted communications.

Until recently, U.S. law enforcement agencies have been reluctant to share sensitive intelligence with their Mexican counterparts for fear they were either corrupt or incompetent. And U.S. agents have been wary of operating inside Mexican command centers for fear they would be targeted for execution in the sensational violence and lawlessness in Ciudad Juarez that left more than 2,600 people dead last year.

But those attitudes are changing amid strong support from Washington for President Felipe Calderón’s war against the cartels, including a $1.4 billion aid package. The Obama administration views spiking drug violence in Mexico as a direct threat to U.S. security and has taken unprecedented steps toward on-the-ground cooperation with Mexican authorities. It is seeking an additional $310 million for drug enforcement aid for Mexico in its 2011 budget.

Under the new arrangement, U.S. law enforcement officers, most likely from an agency such as the Drug Enforcement Administration, would work alongside recent graduates of the new Mexican federal police academy who were trained by FBI and DEA advisers as part of the U.S. aid package.

Read the rest of William Booth’s story at The Washington Post. 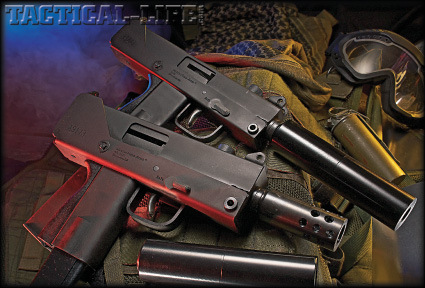 MACs are back with improved features— MPA30T-A 9mm and MPA10T-A .45 ACP handguns!