WASHINGTON, March 11, 2008 – U.S. troop returns will be based on successes on the ground in Iraq, not politics, President Bush said today. Since the surge of additional troops into Iraq in early 2007, the country has seen gains in security, Bush said in Nashville, Tenn., at the National Religious Broadcasters Convention. He cited a drop in sectarian killings and al Qaeda fighters that are increasingly on the run.

Bush said that security improved not only because of additional troops on the ground in Iraq, but because the surge gave the Iraqis hope and the determination to “surge” themselves.

“When they found out they could, they launched a surge of their own. Increasing numbers of Sunni leaders have turned against the terrorists and begun to reclaim their communities,” the president said.

Along with additional troops, the U.S. sent in additional civil support and economic resources, he said. He also cited the addition of 100,000 new Iraqi security forces this year and the government’s new budget as both signs of progress.

“Folks who were involved in the insurgency have now decided they want to be a part of their government. The Iraqi people have begun to see what freedom offers. They’ve seen what the enemy plans, and they have chosen to stand on the side of freedom. And America stands with them,” Bush said.

Bush said he would “carefully consider” Army Gen. David H. Petraeus’ and Ambassador Ryan Crocker’s recommendations next month on the way ahead in Iraq. The two officials are to recommend a timeline for removing the remaining surge brigades left in Iraq. Commanders in Iraq have asked for a brief pause after surge troops have been removed to evaluate conditions before removing more troops.

Bush warned, though, that gains in Iraq are tenuous. “They’re reversible, and they’re fragile. And there’s much more work to be done. This enemy is resilient,” he said.

The president also praised recent progress in the war in Afghanistan.

For the first time in Afghan history, 8 million voters turned out to elect a president. A new constitution has been drafted, and a national assembly elected. The economy has doubled; more than 1,500 miles of roads have been paved; and the majority of Afghans now have access to healthcare that before was limited to a small percentage of the population. More than 50,000 Afghans have volunteered to serve in the Afghan army, and 76,000 have joined its police force.

“A free society is emerging, and the fundamental question facing the United States of America and our friends and allies is: Is it worth it and necessary? I believe it is necessary, and I strongly believe it’s worth it,” Bush said.

The president said he plans to thank NATO members next month at a summit in Bucharest, Romania, for their efforts in Afghanistan. But, he also plans to ask them to do more, he said.

“I will call upon more international assistance to help Afghanistan on the road to freedom,” Bush said. “We know what’s at stake, and we know what we have to do, and so we’re going to help the people of Afghanistan realize the blessings of liberty.” 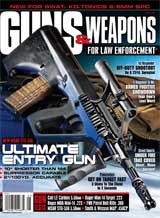 ON SALE TODAY! Guns & Weapons for Law Enforcement May 2008