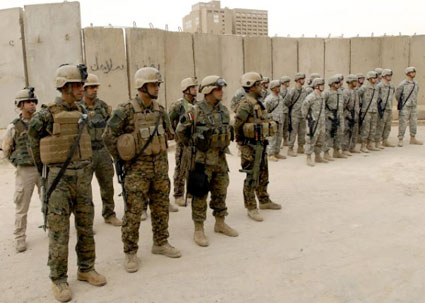 “Many may remember the darker days when a combined U.S. and Iraqi security station was necessary,” said Lt. Col. Robert Kirby, a native of Louisville, Ky., commander, 4th Bn., 42nd FA Regt. “The (Iraqi) security forces, the local leaders, and more importantly, the people decided there had been enough violence and it needed to stop.”

Since 2003, terrorists had a significant influence in the Karkh area of Baghdad, specifically the infamous Haifa Street, which was battleground in early 2007 between Sunni insurgents and partnered Coalition and Iraqi Forces.

“Terrorists tried to take over, but they will never again because of the hard work and sacrifice of Iraqi Security Forces and Coalition Forces,” said Maj. Hussein, commander, 1st Bn., 22nd Bde., 6th IA. “We will never forget those who lost their lives to help secure this area.”

After the partnered warriors neutralized their enemy in the Sheik Marouf area, Hussein said the neighborhood, district councils, government and religious leaders, and citizens of Karkh came together to ensure peace thrived through the area.

“I’m so thankful for the dedication of the people here. We removed the terrorist elements from here and we are here to stay.”

As security improves, the ISF continue to take the lead on ensuring their people are safe. Kirby noted that the transfer was an example of the ISF’s improvement over the last few years.

“Today’s transfer is truly another step forward for the Iraqi people. It shows the capabilities of the Iraqi Army and Police to protect the people,” Kirby said. “While Coalition Forces no longer operate from this site, our commitment to share its goals does not change. We will continue to operate in partnership with the ISF to enable the bright future that lies ahead for the people of Karkh.”

He also said the Karkh’s citizens are beginning to reap the benefits of safety in their neighborhoods.

“From this site, Iraqi Army, Iraqi Police and Coalition Forces, in concert with local government and civic leaders, and the people, planned and conducted operations to rid the area of the violence that plagued it. Families are seen shopping in the markets or in the parks and children attend school without fear,” Kirby said. “Now the concrete walls are coming down and the people are living peaceful together without the threat of attacks and violence.”