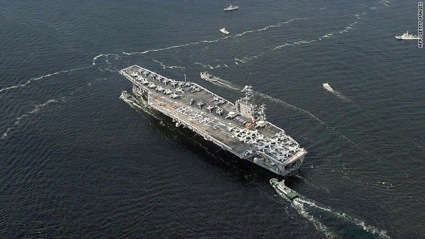 The USS George Washington sailed toward volatile waters off the Korean peninsula Wednesday for planned military exercises with South Korea in a show of force designed to deter a further escalation of hostilities with North Korea.

The exercises were billed as defensive in nature and were a more measured response than the retaliation initially urged by South Korea after North Korea’s shelling of a South Korean island Tuesday, the most serious act of hostility since the end of the Korean war.

“It is a long-planned exercise,” said Adm. Mike Mullen, chairman of the U.S. Joint Chiefs of Staff.
“That said, it is meant to send a very strong signal of deterrence and also work with our very close allies in South Korea,” Mullen said on CNN’s “Fareed Zakaria GPS.” “We’re very focused on restraint — not letting this thing get out of control. The South Koreans so far have responded that way. Nobody wants this thing to turn into a conflict.”