The military has developed technology that uses a high-tech beam to detonate hidden IEDs, an insurgent weapon responsible for the deaths and maiming of thousands of U.S. servicemembers in Iraq and Afghanistan.

Some in the military caution that widespread use of the weapon could cause civilian casualties when the beam triggers improvised explosive devices.

“This is an offensive capability that will change the face of this war,” said Marine Gen. James Mattis, head of the U.S. Joint Forces Command that looks to transform military capabilities. Mattis, a supporter of the technology, acknowledged that civilians could be killed if the weapon is activated over widespread areas. But ultimately the technology would save lives, he said. “A lot more innocent people are going to die if we don’t do it,” he said.

The Pentagon will not release details of the highly classified technology, which bypasses the triggering device of an IED and detonates its explosive. The beam could trigger IEDs being built or transported by insurgents.

The technology was used in Iraq in 2005 and 2008, positioned mainly at checkpoints, said Paul Gido, an official at the Office of Naval Research, which carried out work on the device. The weapon blew up IEDs hidden by insurgents, but it is large and requires a tractor-trailer-size vehicle to be moved about, he said.

The weapon has yet to be used in Afghanistan because the rugged terrain and few roads make it impractical, Gido said. Researchers are working on a smaller, more mobile unit.

The counterinsurgency strategy of Gen. Stanley McChrystal, the top U.S. commander in Afghanistan, calls for civilian deaths to be kept as low as possible to keep Afghans from turning away from the coalition and toward the Taliban.

“You can imagine the challenges of pre-detonating an explosive in a road,” said Lt. Gen. Michael Oates, commander of a task force overseeing ways to counter IEDs. “You have to worry about collateral damage.”

IEDs are the No. 1 killer of U.S. troops in Afghanistan. IED attacks in Afghanistan increased to 3,736 in 2009, up from 1,852 in 2008, according to the Pentagon. The Pentagon has spent billions of dollars building thousands of armored vehicles and fielding jammers that can prevent insurgents from detonating IEDs. “What we ultimately need is not more armor, is not more jammers,” Mattis said.

Mattis supports placing the technology in an aircraft to detonate IEDs over a large area to clear it for U.S. servicemembers. The weapon has not been developed to accomplish what Mattis envisions, and some military officials caution against using it too broadly. 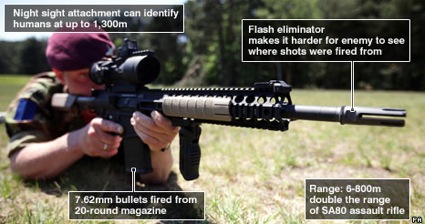 The military has developed technology that uses a high-tech beam to detonate hidden IEDs,…