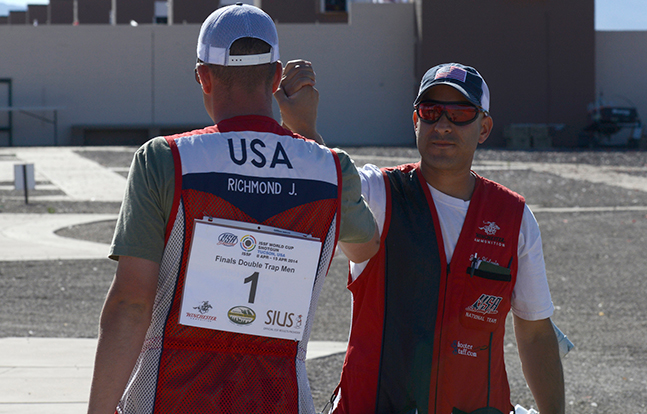 Staff Sergeants Josh Richmond and Jeff Holguin congratulate each other on their victory during the 2014 International Shooting Sports Federation Shotgun World Cup April 13. Holguin took home the gold after winning the shoot off after the two USAMU shooters tied with 27 hits each. (U.S. Army photo by Sgt. 1st Class Raymond J. Piper)
Comment(s)

1 of 3
ISSF Teammates
Staff Sergeants Josh Richmond and Jeff Holguin congratulate each other on their victory during the 2014 International Shooting Sports Federation Shotgun World Cup April 13. Holguin took home the gold after winning the shoot off after the two USAMU shooters tied with 27 hits each. (U.S. Army photo by Sgt. 1st Class Raymond J. Piper) 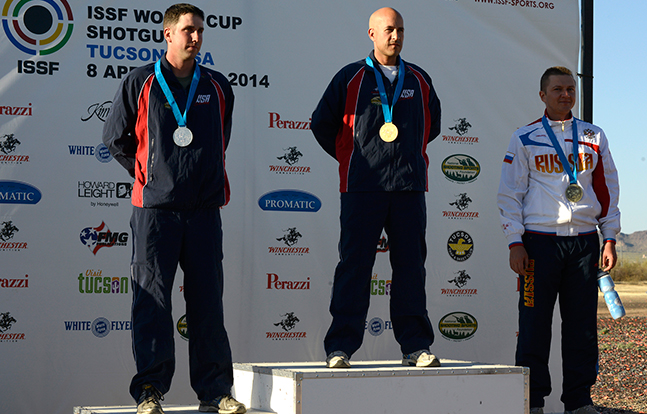 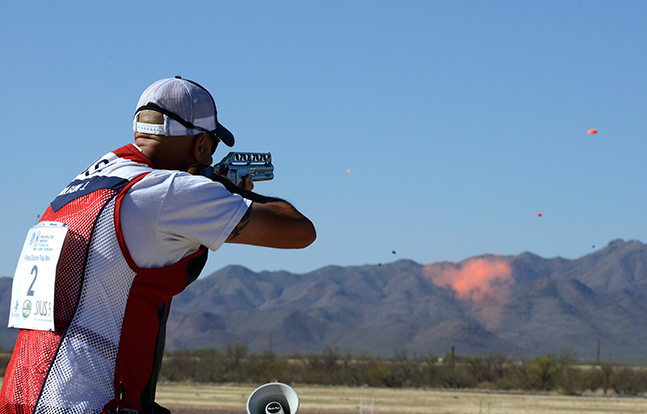 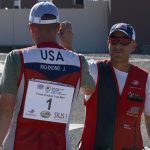 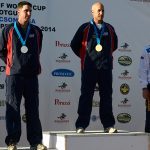 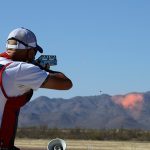 It was a medal-filled afternoon for the U.S. Army Marksmanship Unit (USAMU) on Sunday, April 13, as two USAMU soldiers squared off for the gold and silver medals in the Men’s Double Trap during the 2014 International Shooting Sports Federation (ISSF) Shotgun World Cup at the Tucson Trap and Skeet Club.

The shootout for first place commenced between Staff Sgt. Jeff Holguin and Staff Sgt. Josh Richmond after the dup hit 27 out of 30 targets in the previous round.

In the end, it was Holguin who captured his first World Cup gold by beating his teammate Richmond four hits to three in the shootout.

Richmond said he was surprised when the dust settled, and it was him and Holguin in the top two spots.

“It felt great when I looked over at the score board and I could see it was me and Jeff in the shoot off for the gold and silver,” he said.

Holguin described his first World Cup gold medal as “awesome” because there was a pretty good field of shooters out there. To get to the semifinals, he finished fourth in the qualification with a score of 140.

Shooting against a fellow Soldier, Holguin said, took off some of the pressure.

“If it was someone else, maybe I would have been more nervous, because I wasn’t at all. It just felt like me and him were shooting back at (Fort Benning),” he said.

As they try to win gold throughout the rest of the season, the two shooters are beginning to focus on the road to the 2016 Olympics.

“We have our eyes on the World Championship in Spain. It’s the first time you can earn a quota spot for the Olympics,” Richmond said. “We’re going to be training hard, gearing up toward that.” 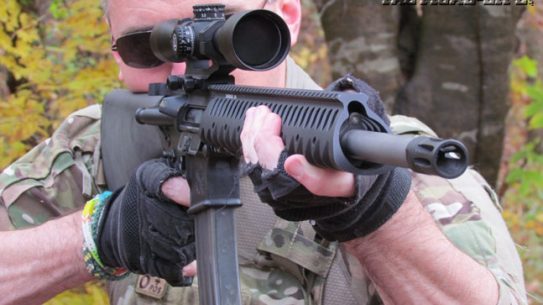 The new .25-45 Sharps cartridge offers maximum terminal ballistics and power from a 5.56mm-sized...