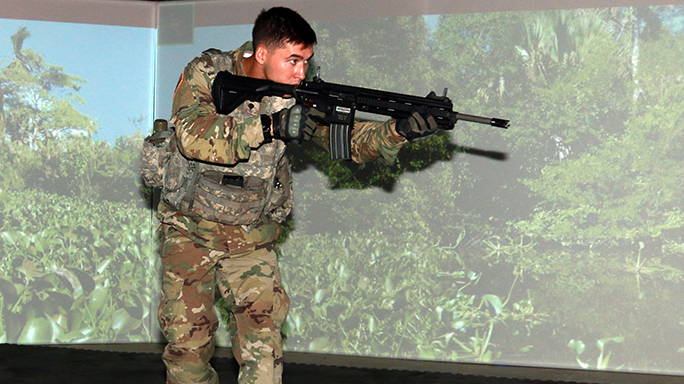 Grafenwoehr, Germany (August 29, 2016) - Staff Sgt. Ethan Rodgers of 7th Army Training Command, trains to improve his shooter mechanics at the Warfighter Gym on Camp Normandy Aug. 29. The simulation training is part of his train up to compete in the Department of the Army's Best Warrior Competition that takes place in A.P. Hill, Virginia, from Sept. 26 to Oct. 3
(Photo by Staff Sgt. Kathleen V. Polanco, 7th Army Training Command)
Comment(s)

Spc. Daniel Guenther, a team leader in Alpha Company of 1st Battalion, 4th Infantry Regiment (1-4), and Staff Sgt. Ethan Rodgers, a squad leader in Bravo Company of 1-4, will be competing among 20 of the Army’s finest warriors representing the 10 commands across the Army.

USAREUR awarded Guenther, 21, as the Soldier of the Year, and Rodgers, 25, as the Noncommissioned Officer of the Year for 2016.

The two infantrymen have been training for the past two months in preparation. Their units have allowed both service members to take time off from their daily duties as the Opposing Forces at the Hohenfels Training Area to solely focus on training.

They were also able to test their knowledge through the mock boards conducted by their seniors, peers and subordinates, utilizing the team that was available to them, said Rodgers.

Above all the training, the service members’ loyalty to their units and dedication to progressing Army leadership has been their driving force to come this far and to keep proceeding.

“My motivation is to make my unit look good because no one comes into the Army knowing everything already,” said Guenther. “I’d like to take what I learned from them and put their name out on the line by representing them well.”

“I want to represent the Army as well as my unit,” said Rodgers. “And take a chance to show the Soldiers I work for what a leader is willing to do to empower and educate them.”

Along with wanting to respectively represent their units, they also had their own goals for competing.

While Guenther said he wants to separate himself from his peers and put everything he has learned to the test; Rodgers wants to make the Army better by developing leaders.

“I wanted to develop Soldiers,” said Rodgers. “But I think it’s more about developing and helping progress the Army by being someone you can look up to and someone you can follow. I want to show I have what it takes to further develop the Army.”

As the Army-wide competition start date approaches, both of the infantrymen are ready to express their dedication to their duty, their unit and to the U.S. Army.

Although the USAREUR Soldiers said that they expect the week in A.P. Hill to be physically enduring and mentally exhausting, they are excited to attend the competition.

“It’s pretty cool to be considered the best of the best,” said Guenther. “I’m honored.”

The above is a release from Staff Sgt. Kathleen V. Polanco, 7th Army Training Command 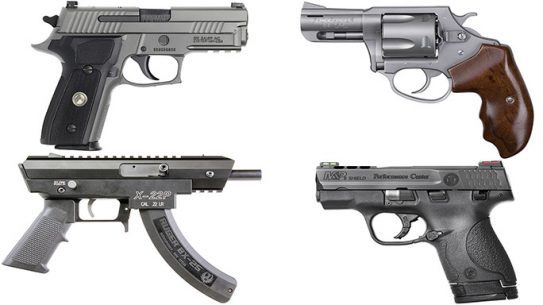 The Future Is Now: 17 Cutting-Edge Handguns

Rounding up today’s newest handguns for duty, self-defense and competition.