An old video of a U.S. Navy prank from 1986 has surfaced on YouTube.

The video shows members of a USS America CV-66 helicopter squad pranking its relieving vessel, the USS Kennedy CV-67, by releasing three greased up pigs colored in red, white and blue on the ship’s deck.

According to the video’s poster, Brian Michaels, on YouTube:

This was filmed in 1986 while I was stationed aboard the USS America CV-66. I was an Aircrewman/SAR Swimmer with HS-11 helo squadron. We were at the end of a 6 month deployment to the Indian Ocean/Mediterranean Sea. We were being relieved by the USS Kennedy. The fighter jet jocks got with us and came up with this slant, on an age old tradition, of releasing a greased pig, onto the deck of the relieving ship. Three pigs painted with Red, White and Blue food coloring and lathered in grease. The Kennedy never seen it coming!

Listen closely in the video to hear the banter back and forth on the radio after the pigs are released.

The USS Kennedy was the last conventionally-powered aircraft carrier built by the U.S. Navy. 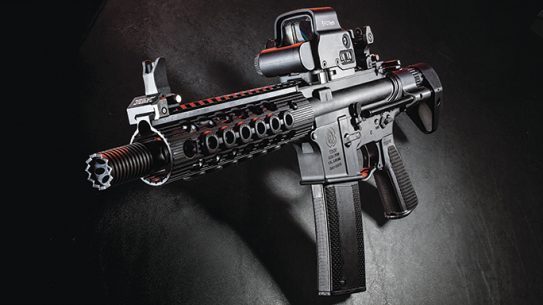