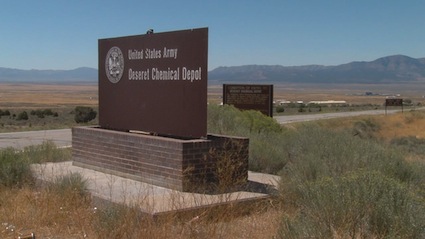 It all began in bitter controversy more than two decades ago. The ambitious plan was to incinerate the nation’s stockpile of chemical weapons of mass destruction.

The biggest chunk of that stockpile was in Utah. And now it’s almost entirely burned up.

But that means big challenges for the Army’s neighbors in Tooele County.

The Army built a huge incinerator plant in the mid-90’s and has operated it for 15 years. The total cost so far is $2.1 billion. They’ve burned up tens of thousands of chemical weapons, and they expect to finish by February, after which the plant will be decomissioned.

“First part will be to decontaminate the facility, removing unnecessary equipment,” said Ted Ryba, site project manager for the U.S. Army. “Then we will get into a wholesale demolition phase, basically taking all of the building down to the ground and disposing of the rubble. We’re expecting that to be done in September of 2014 time frame.”

Simulators sold to military and L.E. include advanced drop-in recoil kits that fit into real firearms.

Image: KSL It all began in bitter controversy more than two decades ago. The…