A Utah trooper was sent flying into the air after getting hit by a car during a snowstorm late last week. The dash cam footage of the incident can be seen above.

According to a Utah Department of Public Safety news release, Sgt. Cade Brenchley of the Utah Highway Patrol was responding to a car that had slid off the road in Sardine Canyon when he was suddenly hit from behind by another skidding vehicle.

The video shows Brenchley getting tossed up and landing beside the car he had stopped to help. The vehicle that hit him then slides to a stop further on up the highway. Bystanders can be seeing rushing to Brenchley’s aid.

Brenchley suffered multiple broken ribs and a broken scapula. He was transported to Logan Regional Hospital, where he is now in the process of recovering.

“It was very slick and slushy and the roads were snow covered,” Brenchley told reporters of the conditions on Highway 89 that day. He said he remembers getting out of his vehicle, “and then I remember everything was black. It felt like a weird dream.”

The driver of the vehicle that hit him rushed out of her vehicle “in hysterics” and tried to help him as he lay on the road, Brenchley recalled. He said he holds no ill will towards her.

“She’s not to be vilified. She did make a mistake and I think she’s learned from it,” Brenchley said, adding that the driver has visited him in the hospital.

In addition to his gratitude at having survived, Brenchley hopes his story will cause drivers to exercise more caution on the road.

“We’re all trying to get to our destination. We’re trying to get there safely, but we’ve got to pay attention to what’s going on around us,” he said. “When there’s snow on the road, you just need to check your ego and slow down, to be perfectly frank. Be patient. Be courteous.”

Sgt. Brenchley is a 13-year veteran of the Utah Highway Patrol. The Utah Department of Public Safety says he’s previously been involved in delivering twins on the side of the interstate and helping save a burn victim in a car crash. In addition, he’s in charge of the DPS’ public information and education efforts in northern Utah and works with local high schools. He’s also a soccer coach in his local community, in addition to being a husband and father of four.

“I’m truly grateful to be sitting here talking to you,” Brenchley told reporters. “It was not my favorite day.”

The Utah Department of Public Safety says 11 troopers have already been hit on Utah roads thus far this year. Last year, 10 troopers were hit in total.

“In only three months, we have unfortunately surpassed that unacceptable number,” the department said. 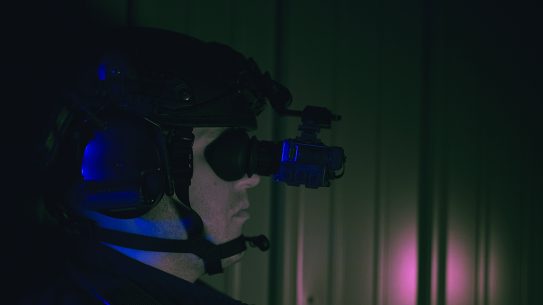