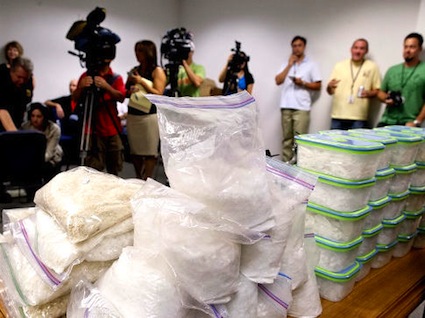 Law enforcement officials heralded the record bust as a significant blow to Las Vegas’ illegal underground that would be felt by every player, including drug bosses, small-time dealers and users hoping to score on the street. The raid yielded four pounds of heroin and 208 pounds of methamphetamine in varying stages of processing, from its liquid form to the crystal-like pieces sold on the street in small quantities for consumption.

“There will be a noticeable difference in the amount of drugs on our streets,” said Las Vegas police spokesman Jacinto Rivera. In the previous record bust, Las Vegas officials seized 70 pounds of methamphetamine, he said.