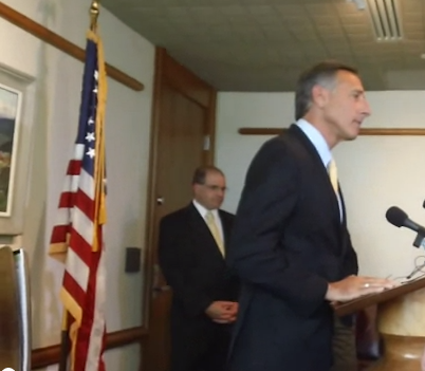 Despite calls for a temporary ban on the use of Tasers in Vermont, Gov. Peter Shumlin today stood firm in his attitude on the use of the devices by Vermont law enforcement officers.

“The notion that we stop using Tasers in Vermont I think would result in police officers having to use bullets more than Taser shots, and that’s not such a great idea,” Shumlin said at a press conference Wednesday.

A group made up of citizen advocates including the American Civil Liberties Union, the Mental Health Law Project, and state representatives proposed a moratorium on Taser use by Vermont law enforcement until policies and procedures can be updated to meet their requirements, including the premise that Tasers should only be used in situations where lethal force would also be justified.

YouTube Description
In light of the tasering of Macadam Mason by Vermont State Police on Wednesday, June 20, 2012 with death resulting, as well as in response to a call for a moratorium on the use of Tasers — until certain statewide policies are put in place as well as police provided more extensive training — issued by mental health and civil rights advocates seven days later in the Cedar Creek Room of the State House in Montpelier, Governor Peter Shumlin answered questions from reporters concerning these matters during his weekly press conference held on Wednesday, June 27, 2012.

“Listen, team: We’ve got an investigation going on and we’re not going to go into the details until they come out,” Shumlin said. “This is what I want to say: You go out there as a law enforcement officer, have someone threaten to kill you, threaten to kill other people, and then second-guess every move they make when they make them. I don’t think that’s appropriate.”

Despite calls for a temporary ban on the use of Tasers in Vermont, Gov.…