An officer from the New Richmond Police Department (NRPD) in Ohio recently showed incredible restraint after being confronted by a dangerous suspect in a “suicide by cop” attempt.

When Kidder finally caught up with the suspect, Wilcox aggressively charged at him while yelling, “Shoot me, shoot me,” according to CNN affiliate WLWT.

Dispatchers had told Kidder the suspect may threaten suicide by cop and that he could have a gun under his seat, but Kidder relied on his own split-second observations to know what to do.

“I was trying to open a dialogue with him. ‘I don’t want to shoot you, get on the ground,’ but he wasn’t having it. He kept repeating, ‘Shoot me.’ At one point, he said ‘Shoot me or I’ll shoot you,'” Kidder told WLWT.

Despite the verbal threat and repeated charges, including a final charge that result in Kidder falling back onto the ground, backup arrived and Wilcox surrendered, ending the suicide by cop attempt.

“Officer Kidder’s life was placed in immediate danger and I am proud to say he used great restraint at the risk of his own safety,” New Richmond Police Chief Randy Harvey said in a statement.

To read more about the incident, please visit WLWT.com. 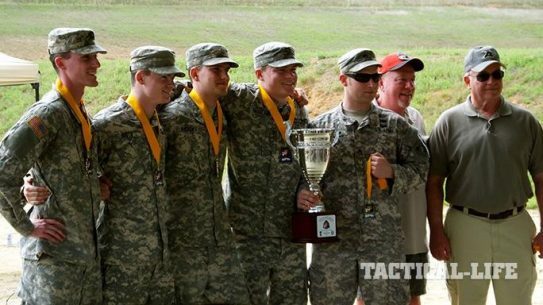 West Point outpaces competition in varsity and junior division to take first at the...