Body camera footage has been released of Newport police officers’ interaction with a homeless man back on Dec. 9.

Two officers with the Oregon-based police department try to reason with the suspect, who is wielding a hammer in the video.

The suspect, identified as 53-year-old Nantharath Thilavanh, had a warrant for arrest on public indecency charges.

After numerous requests from the Newport officers to drop the hammer, police were forced to use less-lethal force in the form of a Taser. Due to the amount of clothing the homeless man had on, the Taser proved ineffective.

Despite several more pleas from officers to drop the hammer, the homeless man lunged at one of the officers, prompting shots to be fired.

According to The Oregonian, Thilavanh, “was shot in the leg and the hip and is expected to recover.”

Thilavanh is struck with the electric shock gun but runs off toward U.S. 101. Both officers warned Thilavanh to stop advancing toward a school bus or risk being shot. The two continue using non-lethal methods to restrain Thilavanh, but they were ineffective because he was wearing several layers of clothing.

Thilavanh then lunged at an officer in what Branam calls “an aggressive stance” and Ashpole discharged his weapon three times. He got off three more shots as Thilavanh kept advancing with the hammer raised.

Watch the first video from the Newport Police Department above and the second video below. 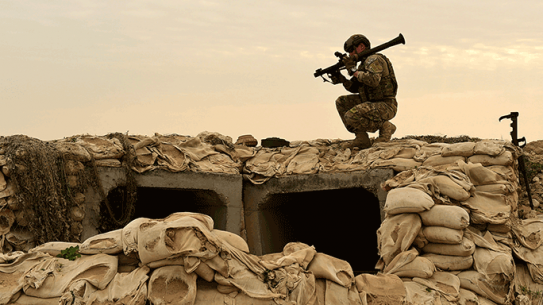 For the first time ever, explosive ordnance disposal (EOD) technicians from the US Air...