No, this isn’t the sequel to “Captain Phillips.” This is real life. A YouTube channel called Humans At Sea has uploaded a video showing an intense firefight between a private security team and a group of Somali pirates trying to board a cargo ship. The clip has already been viewed more than 15 million times since being posted last Thursday.

In the video, which was filmed by one of the armed security guards via body cam, a small boat carrying Somali pirates can be seeing hurtling towards the ship, prompting the private security force to start unloading. That boat bumps into the side of the cargo vessel and then speeds off. A few seconds later, a second boat appears and tries the same stunt, only to be greeted by a hail of gunfire from the armed guards before it too starts heading off in the other direction.

The Daily Mail says the video is believed to have been filmed in the Indian Ocean in 2012.

On its official website, Humans At Sea says Somali pirates actually fired first, but the gun shots couldn’t be heard in the video due to noise and distance.

According to Newsweek, ship hijackings by Somali pirates are trending upward after a five-year break in the region. 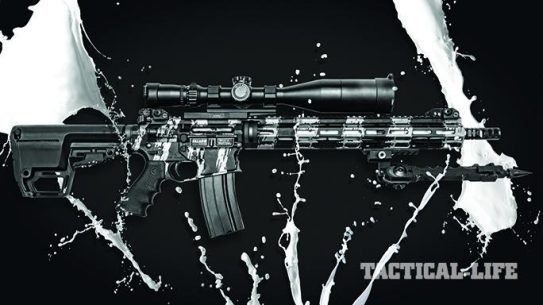 Pushing an AR-15 Out to 1,000 Yards with Falkor Defense’s Caitlyn PSR

Pushing the limits of the AR-15, with some modifications the Falkor Defense Caitlyn PSR...