Multiple videos have surfaced of a Las Vegas Police shooting from Aug. 1, 2017.

The first video above is body camera footage taken from one of the two Las Vegas Metro Police Department (LVMPD) officers involved. The second video below is footage from a bystander who watched the shooting unfold.

According to police, at approximately 4:14 p.m., a two-officer patrol unit responded to a suspicious vehicle with a person inside. The suspect, later identified as 25-year-old Miguel Salas, refused multiple commands from the two officers to exit the vehicle.

“Officer [Richard] Nelson and his partner then attempted to remove Salas from the vehicle. At that point, Salas pulled out a handgun that was concealed by his right leg and began firing at the officers, said LVMPD Assistant Sheriff Tom Roberts in a statement. “Officer Nelson was struck and returned fire, striking Salas. Both officers retreated to cover and waited for additional units to arrive.”

Salas remained in the vehicle and ignored commands from additional patrol units to exit, according to police. The LVMPD SWAT and Crisis Negotiation Team was brought in and after tactically surrounding the truck, it was determined that Salas had expired as a result of his wounds.

Both officers were also struck during the exchange, police said. Nelson taken to the UMC Trauma Center by a patrol car and treated for his gunshot wound, which was non-fatal. The second officer was shot in the gun belt during the incident, but did not sustain any major injuries.

Watch the two videos of the Las Vegas police shooting above and below. 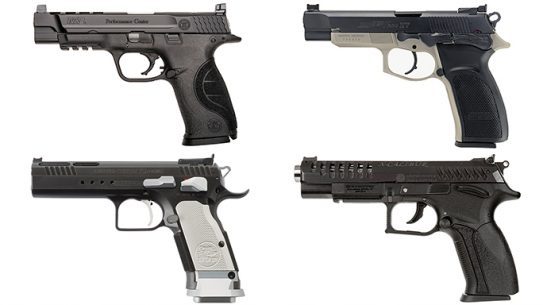 Get ready to rock fast and steady with these nine competition pistol offerings from...