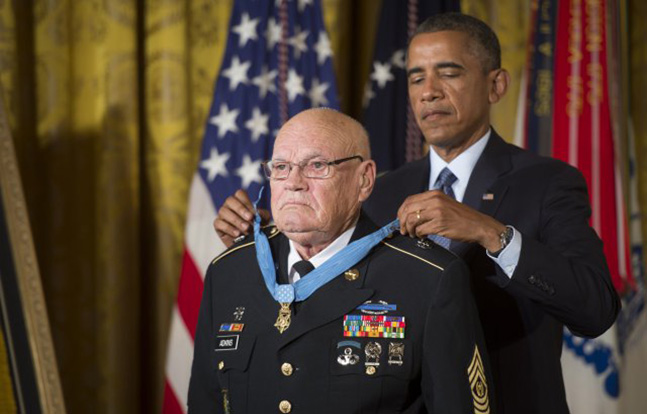 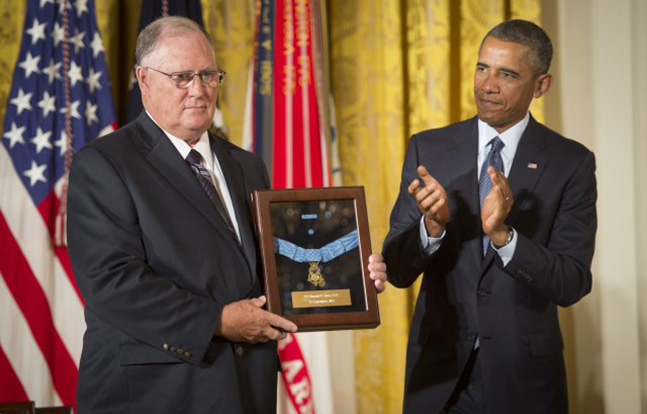 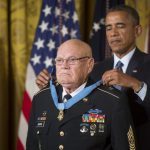 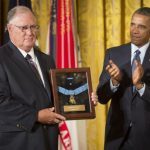 Retired Command Sgt. Maj. Bennie G. Adkins and Spc. 4 Donald P. Sloat were each awarded the Medal of Honor for valor in Vietnam.

President Barack Obama presented the medals during a ceremony in the East Room of the White House. Adkins was present to receive his medal and Sloat received his posthumously. Dr. Bill Sloat, Donald’s brother, accepted it on his behalf.

In 1966, on the other side of Vietnam, deep in the jungle, a small group of Americans were crouched on top of a small hill. And it was dark, and they were exhausted; the enemy had been pursuing them for days. And now they were surrounded, and the enemy was closing in on all sides, he said.

In early 1970, an American squad in Vietnam set out on patrol, Obama related. While marching down a trail past a rice paddy, shots rang out and splintered the bamboo above their heads. The lead Soldier had tripped a wire — a booby trap. A grenade rolled toward the feet of a 20-year-old machine gunner.

Adkins, who fought through a ferocious battle, found himself on that jungle hill, and Sloat stood above that grenade

“Normally, the Medal of Honor must be awarded within a few years of the action. But sometimes even the most extraordinary stories can get lost in the fog of war, or the passage of time,”Obama said. “Yet, when new evidence comes to light, certain actions can be reconsidered for this honor, and it is entirely right and proper that we have done so.”

Read more about Adkins and Sloat on Army.mil. 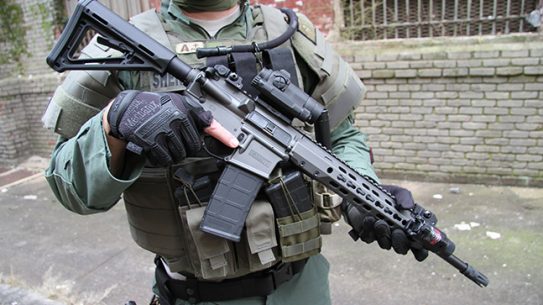