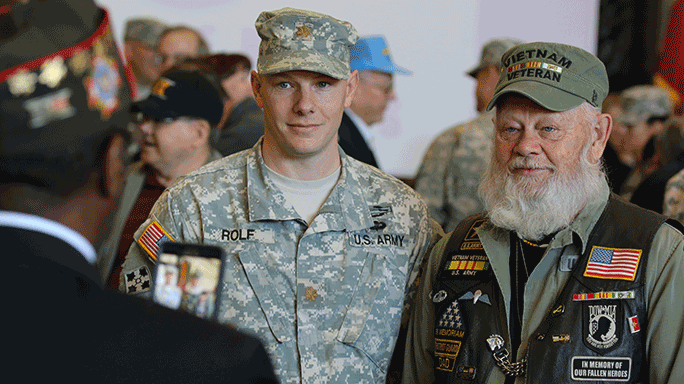 The following is a release from J. Parker Roberts:

As the hangar doors slowly opened, hundreds of loved ones and members of the community jumped to their feet, wildly applauding and cheering as the men and women, who fought in one of the nation’s most complicated and controversial wars entered, the room.

It was a much different reception than the one the troops saw more than four decades ago as they returned home from the Vietnam War.

To show Vietnam-era veterans the gratitude and honor many didn’t receive while on active duty, the 1st Infantry Division and Fort Riley hosted the Vietnam Veterans Welcome Home Ceremony on the post’s Marshall Army Airfield, Nov. 6. More than 150 veterans from every branch of service attended the ceremony from as far away as Michigan, New Mexico, Texas, Wyoming and Indiana.

This year marks the 50th anniversary of the beginning of the Vietnam War.

“I am humbled and proud to be able to preside over this ceremony, which is far different than what our brave Vietnam veterans came home to some 50 years ago,” said Maj. Gen. Wayne W. Grigsby Jr., 1st Infantry Division and Fort Riley commanding general. “I am happy to say ‘welcome home and job well done’ to our returning service members.”

Grigsby also congratulated and asked for a round of applause for the veterans’ loved ones.

“Families are the reason we fight,” he said. “They bear the heavy burden of their loved ones’ absence, and we cannot do it without them.”

The “Big Red One,” or BRO, was the first division called to fight in Vietnam 50 years ago.

“These men are shining examples of the ‘BRO’ charge,” Grigsby said. “Clearly they were brave, and responsible for the lives of their fellow Soldiers. They were on point, understanding that their actions mattered, that they were a part of something bigger than themselves.”

Almost 2.6 million men and women deployed in support of the Vietnam War. More than 3,000 1st Infantry Division Soldiers were killed in action, including the commanding general, Maj. Gen. Keith Ware, whose helicopter was shot down over the jungles of Loc Ninh, Sept. 13, 1968.

“It’s all about finally coming home,” said John Moen, a combat medic from Plano, Texas, who served with the 1st Infantry Division’s 3rd Brigade Combat Team from 1966 to 1967. “This is the final cap. When I heard this event was going to occur, I figured this is the cap, this is the final ‘I’m home.’ And it feels that way. Just coming on post felt that way.”

More than 58,000 Americans were killed in the Vietnam War and more than 300,000 were physically wounded, though Grigsby pointed out that far more Soldiers carry the “invisible scars” of war.

“A welcome back from grateful Americans is just the beginning of a process that is needed to help troops cope with what they endured,” Grigsby said. “That’s not something our society knew how to help with as our Vietnam service members came home. Wounds, especially the ones not visible, didn’t get the treatment they needed.”

The general said society has improved in terms of veteran care, including behavioral health issues to traumatic brain injuries. Now, he said, communities need to reach out to those impacted by the experience of war, from the remaining veterans of World War II to those who served in Vietnam – even those who serve in conflicts today across the globe.

“Our service members share bonds forged in combat, but they need to forge similar bonds with their communities to truly heal,” Grigsby said. “We honor here the burdens borne by our brothers and sisters that served in Vietnam, full knowing that they were not embraced as they should have been when they came home.”

Despite not receiving the care and consideration they deserved upon returning home, Grigsby said Vietnam veterans cared for one another and continue to care for veterans of all eras.

When Moen returned home from Vietnam, he said he immediately felt absolute repulsion from the public.

The veteran said the public response to his return gave him a very uncomfortable and unpleasant feeling.

“And there was nobody there at all to say ‘welcome home,'” he said, “not a soul. Not my local VFW [Veterans of Foreign Wars], not my town, not my church, not my friends.”

The experience was especially jarring for Moen, who watched as veterans from World War II and the Korean War came home to heroes’ welcomes.

The Vietnam Veterans Welcome Home Ceremony was an opportunity for this generation to do right by Soldiers like Moen and his fellow veterans, Grigsby said.

“To the greatest generation, to the Vietnam veterans,” Grigsby told the service members, “welcome home. 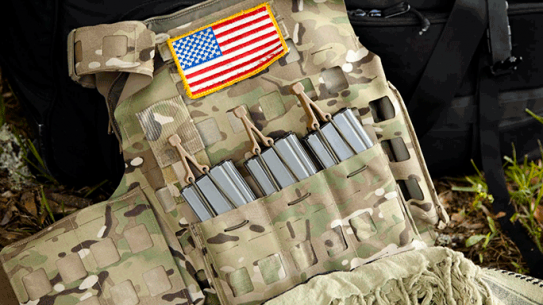