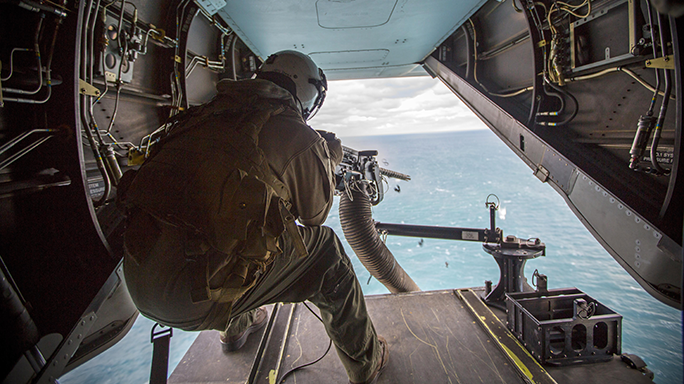 Lance Cpl. Jarod L. Smith, a crew chief with Marine Medium Tiltrotor Squadron 365, fires a mounted M2 Browning .50-caliber machine gun from the back of the MV-22B Osprey during a live fire training session off the coast of Marine Corps Air Station New River, N.C., Feb. 10, 2016. Marines with VMM-365 flew to a landing zone, which allowed pilots to practice CALs in their Osprey’s and then flew several miles off the coast to practice their proficiency with the .50-caliber machine gun.
(Photo by Lance Cpl. Aaron Fiala)
Comment(s)

Marines with the unit flew two MV-22B Ospreys to a landing zone for familiarization flight training, which allowed pilots to practice landings. After practicing CALs, the crew flew off the coast to a safe distance in order to practice shooting the machine gun from the back of the aircraft.

Prior to their flight, the pilots and crew gave a brief which covered information about the aircraft’s capabilities, as well as factors that may affect the flight, such as current and expected weather conditions. The crew conducted a thorough inspection of their Osprey and after the aircraft was deemed safe and ready for flight, they took to the sky.

“Section CALs is just one of the biggest basic building blocks into what we do,” said Capt. Edward K. Williams, a pilot with the unit. “You have got to master that before you can get three or four aircraft into a zone and then move on to doing that at night.”

The pilots and crew traveled to a nearby landing zone to practice landings and take-offs. For this part of the flight there were two Ospreys landing within close vicinity.

“The purpose of the training today was mainly proficiency,” said Lance Cpl. Jarod L. Smith, a crew chief with the unit. He explained how of the two aircraft, one had fairly experienced pilots and crew but the other aircraft had a newer pilot who was getting his initial code.

Smith explained that pilots acquire different codes for the flights they conduct.

Once the initial CALs flight was completed, the Marines returned to the hangar to refuel and then flew out for a .50-caliber machine gun shoot.

“The tail guns are important because [they] are our primary weapon,” said Williams. “If there is a threat in the zone the crew chiefs need to be proficient to be able to engage a threat without prior notice.”

The .50-caliber machine gun was mounted on a pivot in the back of the Osprey. The pivot allows the weapon operator to take advantage of a wide angle to effectively engage any target. Smith explained how firing these larger rounds offer more penetration than other munitions and allow the gunner to engage enemies at greater distances.

The Osprey made several passes allowing each of the crew members in the back to practice firing the weapon system. Each pass involved firing into an area of the ocean while keeping a tight group on the rounds fired.

Debriefs allow pilots and crew chiefs to assess their flights and determine how to improve their next flight. Even if the flight goes according to plan, Marines always look for ways to improve for future operations.

“Training is important because as Marines we pride ourselves in readiness,” said Smith. “We need to be proficient in confined area landings because that is what you’re going to [conduct] when you’re anywhere.” 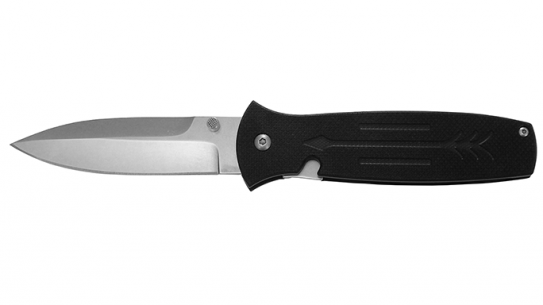