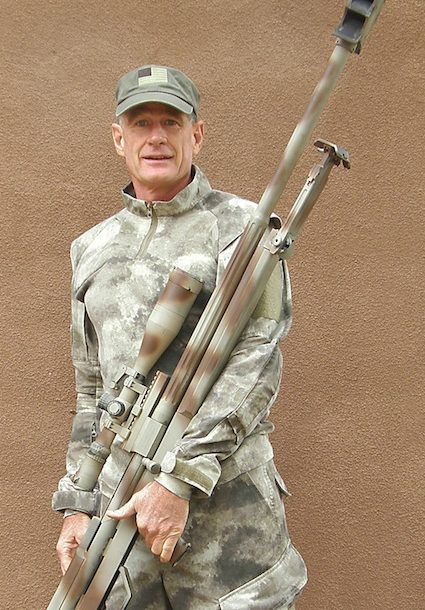 Wilkinson, a retired U.S. Army Special Forces sergeant major and current Gunsite Academy instructor, ran up a two-day aggregate score of 274-6X out of a possible 300, beating his next closest competitor, Lee Rasmussen, by two Xs. With his Nightforce NXS 5.5X-22X 56mm scope and the HS.50’s stock folding bipod in place, Wilkinson’s rifle weighed in at just about 30 lbs. in a class with a 50-lb. limit. The Hunter Class is a 1,000-yd. course of fire consisting of six, five-shot strings, with three strings shot on the first day, and three strings shot on the second day. Due to the wildly varying winds on this range, competitors who shot in the morning of the first day were required to shoot in the afternoon of the second day, and vice versa, to equal the playing field.

Slotted in the first afternoon’s fourth relay, Wilkinson’s consistency, solid wind-doping and holding skills paid off as the winds made an especially tricky display with a 180-degree shift as thunderheads came over the Sangre de Cristo Mountains. Heading into his morning relay on the second day, Wilkinson found himself in second place with nothing to do but hammer the 12-inch 10-ring to work his way into the championship title. 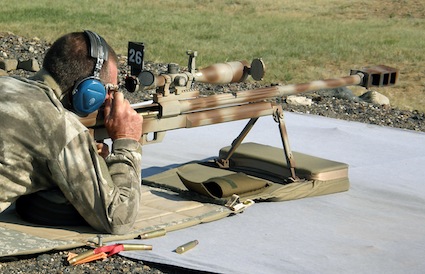 Wilkinson, who purchased the Steyr HS.50 in 2007 and soon thereafter topped it with a Nightforce scope and a two-tone coat of Krylon paint, began working on load development as a main priority in order to compete in this type of long-range match.

“As I was working up a load for the HS.50, I shot groups that amazed me,” Wilkinson said. “They were the best groups that I have ever shot in my life—and they were with the .50 BMG!

“This didn’t make sense to me,” he said. “With my experience with the performance of the same cartridge overseas, I didn’t expect that kind of accuracy out of it. I was getting groups of .214 MOA at 220 yards, and I didn’t know what to think. All the bullets were going in the same hole, and it was like ‘Wow, I’ve really got a rifle that can shoot here.’ And since then, with working up different loads and knowing what the gun likes, I have become extremely happy with the HS.50.” 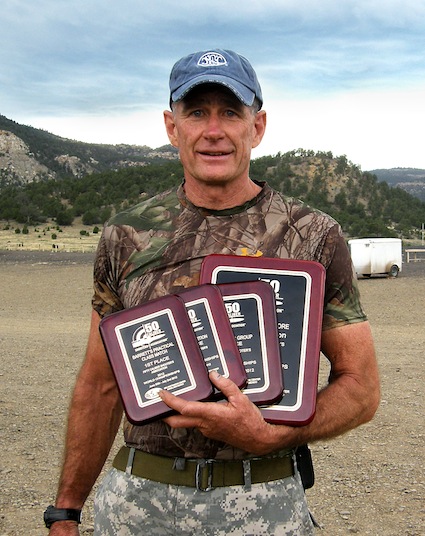 In addition to the new Hunter Class World Championship title, Wilkinson was also a member of the Ten-X team, which won the Team World Championship with an aggregate score of 1081-24X combined with an average group size of 14.549 inches for a combination score of 19.508, as compared to the second place team’s 35.026. Each team comprised of four shooters with one from each of the four classes represented at the championships: Light, Heavy, Unlimited and Hunter.

On the day prior to the FCSA World Championships, June 30, Wilkinson also topped the winner board of the 600-Yard Practical Match with a score of 123-1X out of 150 possible. Using ball ammo of unknown origin, as did everyone else on the line, this was his third consecutive 600-Yard Practical Match win at the World Championships using the Steyr HS.50.

“I offer our most sincere congratulations to Sgt. Maj. Wilkinson on his pair of FCSA World Championship titles,” said Scott O’Brien, CEO of Steyr Arms. “His incredible long-range target-shooting skills, coupled with his amazing ability to read and overcome the ever-changing winds at the NRA Whittington Center and his meticulous load development proved yet again that a highly-skilled competitor can take one of our bone-stock rifles and win a world championship—or two—and maybe even an extra side match win for good measure.”

“After people have seen my success with the Steyr, several people are really looking hard at this rifle,” said Wilkinson. “One guy has already bought one to use in the Hunter Class and possibly to use in the Practical Match.” 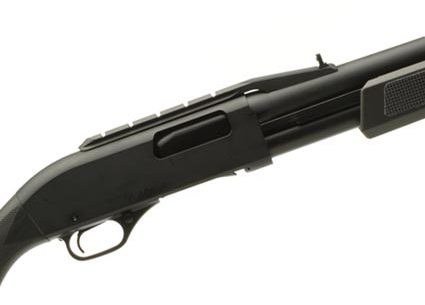