An Army specialist just home from the Middle East shot and critically wounded a robber who tried to hold up his family after they stopped with car trouble late Thursday, authorities said.

Two other robbers returned fire as they pulled their wounded accomplice into a getaway car and sped away from the McCleod Road crime scene, according to Colleton County Sheriff George Malone. None of the victims were wounded, but their cars were struck by bullets, deputies said.

Deputies located the injured suspect a short time later at Colleton Regional Hospital, where he was being treated for several gunshot wounds, deputies said. David Jayquon Jakes, 19, of Smoaks was later transferred to Medical University Hospital in Charleston, where he remains in intensive care, Chief Deputy Ted Stanfield said.

Investigators have no plans to file charges against the serviceman who shot Jakes, as he had a valid concealed weapons permit and acted in self-defense, Malone said.
Authorities did not release the names of the serviceman or his family, citing safety concerns as deputies search for the two others robbers involved in the incident.
Sheriff’s officials said the episode played out this way:

Shortly before midnight, the Army specialist, his wife and mother-in-law were traveling down Interstate 95 in two vehicles, one of which was pulling a U-Haul trailer.
Hailing from a northern state, they were passing through on their way further south when the car with the trailer started having mechanical problems.
They took the exit ramp to McLeod Road, near Walterboro, to transfer the trailer from the disabled car to the second vehicle. While the serviceman was trying to wire the trailer’s lights to his truck, a silver sedan pulled up with three men inside.

A man with a cloth over his face stepped from the back seat of the sedan and pointed a .50-caliber Desert Eagle pistol at the older of the two women, ordering her about as he called her “pretty lady.” As she ran toward her daughter, her son-in-law stood up and pulled out his own gun. He ordered the strangers to leave several times.

Source: Glenn Smith for The (Charleston) Post and Courier. 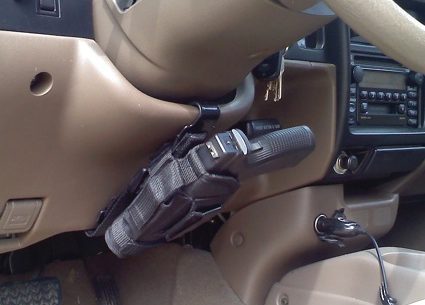 The universal steering column handgun holster mount is great for carrying a handgun in...