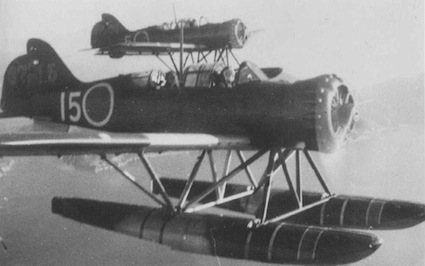 The E14Y Type 0 recon seaplane flew with a pilot and observer/gunner, could carry four 168-pound incendiary bombs, and mounted one Type 92 7.7mmR (.303 British) Lewis flexible machinegun. It had a range of 548 miles at a cruising speed of 104 mph. (Photo courtesy IJN, via U.S. Navy)

Fortunately for us, the Imperial Japanese Navy thought we had a lot more going for our continental defense after their attack on Pearl Harbor than we actually did. We were Island America, not Fortress America. Nearly a year after Pearl Harbor, Japan’s naval forces were still preoccupied in the South Pacific, and so were we—because that’s where the enemy was.

The submarine forces of Japan, however, were running rampant from their South Pacific bases in Kwajalein in the Marshall Islands to the West Coast of North America. They were preying upon allied shipping with telling effect, because early in the war we did not have the forces to challenge them. Practically unfettered, one of the Japanese submarines most active along the North American West Coast was the I-25. Longer than a football field, the I-15-class, B-Type submarines were unique in that they had an airplane hangar forward of the conning tower, which held a Yokosuka E14Y “Glen” two-seater floatplane, disassembled. It was launched from a 20-meter steel catapult ramp forward of the hangar, and on its return the Glen landed in the water and was lifted aboard with a crane, and re-stowed disassembled in the hangar.

The I-25 and her crew of more than a hundred had been very busy. She took part in the attack on Pearl Harbor, and Warrant Officer Nobuo Fujita had flown his Glen from the I-25 to photograph the Allied build-up in Wellington, New Zealand, and again on March 13, 1942, over Auckland, as well as flying over Sydney, Melbourne and Bass Strait, Australia. With unrestrained success, the I-25 had been preying upon Allied shipping in the Pacific and along the American West Coast. She returned to Kwajalein on March 31, then to Yokosuka for refit. The I-25 was in dry dock 5 on April 18, 1942, when the Doolittle raiders blasted the carrier Ryuho next to her in dry dock 4. 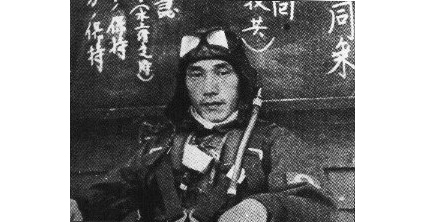 Warrant Flight Officer Fujita Nobuo would become an honorary citizen of Brookings, Oregon, and an unofficial goodwill ambassador after the war. Some of his ashes are buried at the site of his Oregon bombing. (Photo courtesy IJN)

You Bomb My Homeland, I Bomb Yours
In a long-range game of counting coup, Warrant Flight Officer Nubuo Fujita was specifically chosen for a special incendiary bombing mission to create forest fires in North America. The I-25 left Yokosuka on August 15, 1942, carrying six 76kg (168-pound) incendiary bombs. On September 9, the crew again deployed the Glen off Cape Blanco in southern Oregon. Piloted by Fujita with observer/tail gunner Petty Officer Shoji Okuda, the plane flew inland about 50 miles and dropped two bombs in the Siskiyou Forest near Brookings, Oregon—the first time the continental U.S. was bombed by enemy aircraft.

The Oregon coast had been at times extremely vulnerable to fire—the monstrous Tillamook Burns of 1933 and 1939, and the destruction of the town of Bandon for example—but in this instance, light winds, wet weather and alert fire lookouts held the damage to a few startling headlines.

Fujita returned to the I-25, and about as fast as they had stowed the Glen, the I-25 was bombed by an A-29 Hudson from McChord Field, Washington. The American plane’s time-fuzed bombs caused only minor damage, but the fast response of a Coast Guard cutter and three more aircraft made I-25’s skipper Lieutenant Commander Meiji Tagami more cautious on a similar raid on September 29. Launched in pre-dawn darkness using Cape Blanco Lighthouse to navigate, the plane was heard at 5:22am by a work crew at the Grassy Knob Lookout 7 miles east of Port Orford, Oregon. But this time fire crews from the Gold Beach Ranger Station were unable to locate any evidence of the two incendiary bombs dropped.

On the September 9 raid, fire lookout Howard Gardner spotted and reported the incoming Glen from his tower on Mount Emily. He heard the engine of the airplane and it sounded like the backfiring of a Model-T.

A Japanese Fire Drill
Although Gardner did not see the bombs drop, he saw the smoke plume and reported the fire to dispatch, who told him and lookout Keith Johnson from the nearby Bear Wallow Lookout Tower to go to it and begin suppression. They were able to keep the fire under control as only a few small, scattered fires were started because the bombs apparently were not dropped at the optimum height to disperse the incendiary pellets. The two men worked through the night and in the morning a crew arrived to help dry-mop the fire.

A full investigation was launched by the FBI, which resulted in locating several bomb fragments and uninitiated incendiary pellets. The story was reported in several newspapers on September 10. Western Defense Commander Lt. Gen. John L. DeWitt issued a communiqué:

“The Western Defense Command is investigating the circumstances surrounding the discovery on Sept. 9 of fragments of what appears to have been an incendiary bomb. These fragments were found by personnel of the United States Forestry Service near Mt. Emily nine miles northeast of Brookings, Or. Markings of the bomb fragments indicated that the missile was of Japanese origin.

“At about 6 a.m., Pacific War Time, Sept. 9, a small unidentified seaplane was observed coming inland from the sea and a half an hour later a plane was heard at the same point headed toward the sea. Due to poor visibility the plane was not seen on its westward trip.

“At 6:24 a.m. Mr. Howard Gardner, a forestry service observer on Mt. Emily reported seeing an unidentified seaplane come from the west, circle and return toward the sea. He described the plane as a single-motored biplane with a single float and small floats on the wing tips.[sic] The plane appeared to be small and of slow speed. It had no lights, no distinct color and no insignia was visible. It is possible that a plane of this type might have been carried on a submarine.

“About 11 a.m. the same day, a small fire was observed about three miles south of Mt. Emily. Investigation by forestry patrols who extinguished the fire disclosed a small crater about three feet in diameter and slightly more than a foot in depth.

“The earth appeared to be scorched. An examination of a crater and the area in the vicinity revealed about 40 pounds of metal fragments and a number of pellets. The fragments disclosed markings of Japanese ideographs which may have been part of a code indicating the arsenal where the bomb was manufactured. A search of the area has failed to reveal the presence of any other indications of bombs having been dropped.”

From Warrant Officer to Grand Marshal
Twenty years later, Nobuo Fujita was invited back to Brookings. Before he made the trip the Japanese government was assured he would not be tried as a war criminal. In Brookings, Fujita served as Grand Marshal for the local Azalea Festival, where he presented his family’s 400-year old samurai sword to the city as a symbol of regret. Fujita made a number of additional visits to Brookings, serving as an “informal ambassador of peace and friendship.” Impressed by his welcome in the United States, in 1985 Fujita invited three female students from Brookings to Japan. Fujita would return to Brookings several times, and was made an honorary citizen of Brookings several days before his death on September 30, 1997, at the age of 85. 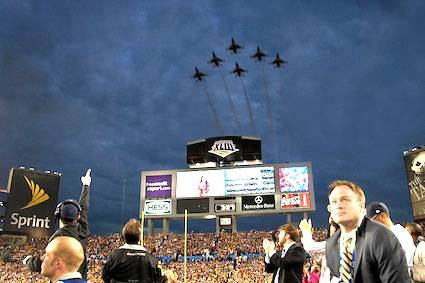 The E14Y Type 0 recon seaplane flew with a pilot and observer/gunner, could carry…