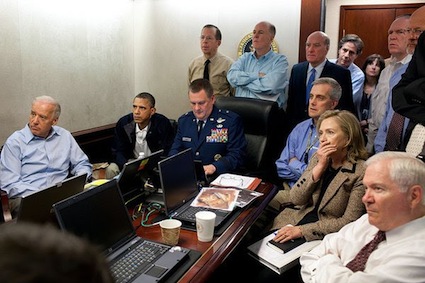 U.S. President Barack Obama and Vice President Joe Biden, along with members of the national security team, receive an update on Operation Neptune’s Spear, a mission against Osama bin Laden, in one of the conference rooms of the Situation Room of the White House, May 1, 2011. White House Flickr Feed/Wiki

Judicial Watch, the organization that investigates and fights government corruption, announced today that it has obtained records from the U.S. Department of Defense (DOD) and the Central Intelligence Agency (CIA) regarding meetings and communications between government agencies and Kathryn Bigelow, Academy Award-winning director of The Hurt Locker, and screenwriter Mark Boal. According to the records, the Obama Defense Department granted Bigelow and Boal access to a “planner, Operator and Commander of SEAL Team Six,” which was responsible for the capture and killing of Osama bin Laden, to assist Bigelow prepare her upcoming feature film.

The CIA and Pentagon said there was nothing unusual about their dealings with the filmmakers.

“The CIA has been open about our engagement with writers, documentary filmmakers, movie and TV producers, and others in the entertainment industry,” said Jennifer Youngblood, an agency spokeswoman.

She added: “Our goal is an accurate portrayal of the men and women of the CIA, their vital mission and the commitment to public service that defines them. The protection of national security equities is always paramount in any engagement with the entertainment industry.

U.S. President Barack Obama and Vice President Joe Biden, along with members of the…