Police in Marshfield, Wis., used less lethal bean bag rounds and a K9 to take down a suspect who chased two social workers from his home with a pair of knives and threw one of those knives at their car. He then ignored commands to drop the remaining knife during a 10-minute standoff.

After getting a call from the social workers, Marshfield police officers arrived to find 52-year-old Patrick Langreck holding the knife on the street in front of his house. The video above shows him walking toward the officers while holding the knife.

“Pat, stay there. I don’t want you to get hurt,” one officer can be heard saying.

“Pat, put that knife down,” an officer says.

Langreck doesn’t comply with those orders. Instead, he continues inching closer to the officers. At that point, the officers made the decision to deploy less-lethal bean bag rounds to subdue him.

“Behind the squad car the officers don’t have any cover so we had to try to subdue him. The entire time the individual has the knife in his hand he is a threat, at any time he could change his direction. We’re within 25 feet here,” Marshfield Police Lieutenant Jody Geurink told WSAW.

The officers took Langreck into custody and transferred to the Wood County Jail after he was medically cleared, the Marshfield News Herald reported.

“They made split-second decisions that were absolutely brilliant,” McManus said. “If you hear on the tape, you can hear them saying, ‘stop, put the weapon down,’ they just continued with the escalation. So we couldn’t be prouder of our officers in Marshfield,” McManus said.

“You know, in review of everything there, it just shows why we in Marshfield are so proud of all of our men and women behind that badge. And I’ve got to give a shout out to our great chief Rick Gramza. This is a testament to the training and department that he runs,” McManus added.

Geurick said his department appreciates the support from city officials.

“This is another case where we responded appropriately, and it is nice to have the commendations and the support,” he said. “Our officer safety is always paramount. This is just a situation that worked out for the best for us and also this individual.”

Langreck, who was on parole for two prior convictions of theft by false representation and criminal damage to property, is now facing four felony counts of reckless endangerment. He’s also been charged with one count of obstructing an officer. His bond has been set at $50,000. 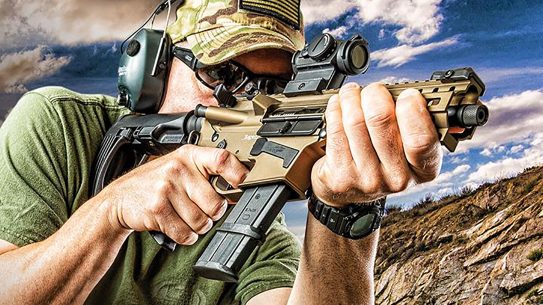 CMMG's the Mk57 Guard is a new series of AR pistols and short-barreled rifles...