Like it or not – and it is clear from their reaction that the Brady Campaign to Prevent Gun Violence does not – a ruling by a Wisconsin circuit court judge that found the state’s prohibition on concealed carry to be unconstitutional is an affirmation that the Second Amendment Foundation’s victory in McDonald v. City of Chicago was not only proper, it was the right thing to do.

My esteemed colleague, Wisconsin Gun Rights Examiner Gene German, writes about the Wisconsin case here, and he clearly is delighted that Clark County Judge Jon Counsell issued the ruling. Wisconsin is one of two stubborn, hold-out states that does not have some form of concealed carry. Making matters worse, police in Wisconsin – at least in Madison and Milwaukee – have apparently decided to essentially ignore an opinion by state Attorney General J.B. Van Hollen that open carry is legal, and they have confronted legally-armed law-abiding citizens. In one case in Madison, five citizens have been charged with disorderly conduct following a confrontation with police at a restaurant where they were enjoying a meal. As one might guess, the Open Carry folks are not happy.

“In addition, as noted above, this court agrees with Justice Clarence Thomas’s McDonald concurrence and application of the Fourteenth Amendment to this matter. In essence, no State shall abridge the privileges and immunities of citizens of the United States. As Justice Thomas demonstrates, the right to keep and bear arms is a fundamental right, not created by the Second Amendment, but secured or recognized by it. The right to keep and bear arms is therefore not to be abridged by any State law. Sec. 941.23 must also fail under the application of the Fourteenth Amendment.”—Judge Jon Counsell

The result of this ruling, which will be appealed, could be what has been dubbed “Constitutional Carry” for the state of Wisconsin. That is, citizens there would be able to carry firearms openly or concealed without a permit, if Judge Counsell’s ruling is upheld. 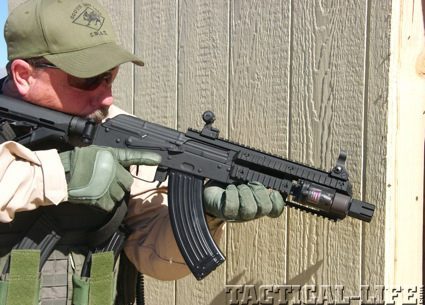