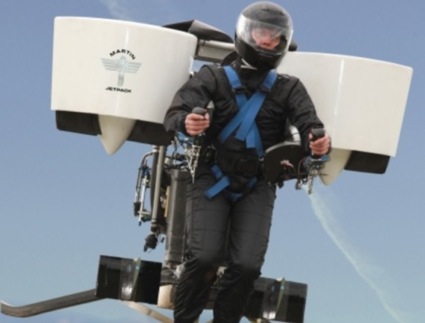 This may be a case of one giant leap for one man, if only one small step for mankind. Christchurch, New Zealand-based Martin Aircraft Company plans to start selling commercial jetpacks to anyone with an interest and $75,000. The machine is expected to revolutionize the military and be taken up by emergency services around the world.

The Telegraph reports that Martin has partnered with an unnamed international aircraft company, resulting in enough capital to produce 500 jetpacks per year. The partnership has brought the jetpacks closer to reality compared with a year ago, when Martin’s goal was to produce ten units at $100,000 each.

The 200-horsepower, dual-propeller jetpacks seem to offer many features we would look for in a personal flying machine. The jetpack can travel for about 30 minutes on a five-gallon tank of premium gasoline (the same used by cars). Tests have shown that the jetpack can reach top speeds of 60 mph, giving it a range of 30 miles per tank. The newest model can also reach heights of 2,400 meters (about 1.5 miles).

The jetpacks weigh less than 254 pounds, so they do not require a pilot’s license to fly. Martin says, however, that buyers will be required to go through training before taking to the skies. The jetpack is also equipped with a low-altitude emergency parachute.

The jetpack, which can lift up to 120 kilograms (265 pounds), has two propellers that generate lift. The air in the propellers moves at about 300 km per hour, creating an upward thrust. The pilot uses both hands to fly, one on the throttle and one for steering. A flight display in front reveals information such as what the engines are doing and where it’s going. If the pilot lets go of the controls, the jetpack hovers in one spot. This self-righting mechanism occurs since the center of mass is below the jetpack’s center of pressure, which is located at the bottom of the ducts (near the pilot’s shoulders).

The jectpack will give environmentalists a headache. The five-foot-by-five-foot-five-inch device burns ten gallons of fuel per hour — five times as much as the average car.

Read more of the article at the Homeland Security Newswire.

This may be a case of one giant leap for one man, if only…