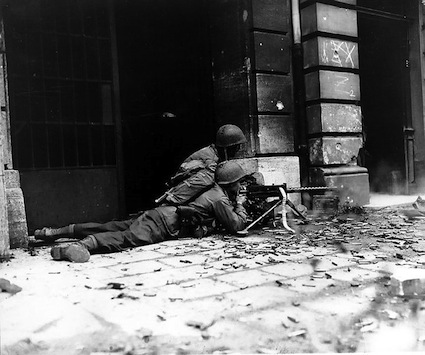 A World War II-era Browning machine-gun discovered by US Army reservists in Iraq will soon have a home in a U.S. museum.

The M1919A4 machine-gun was discovered by the 96th Sustainment Brigade of Utah’s Fort Douglas in Taji, Iraq, during its 2009-2010 deployment, The Standard-Examiner reported Tuesday.

The unit was working with Iraqi military and found the weapon while sorting through debris after the bombing of a supply depot.

Capt. John Lovejoy of the 96th Sustainment Brigade said the gun was immediately recognized by reservists, who got permission to keep it from the Iraqi military.

The gun has been cleaned and demilitarized so it can’t fire and will soon be installed as an exhibit at the Browning Arms Museum at Union Station in Ogden. The Browning Arms Co. was founded in the northern Utah city.

Machine-guns are illegal to import, and the military paperwork involved in bringing one can be daunting, Lovejoy said.

Just how the Browning ended up in Iraq is a mystery.

The M1919 was invented by John M. Browning after World War I General of the Armies John J. Pershing asked him for something lighter and more durable than the water-cooled M1917.

The machine-gun was then exported extensively, including to the British, who occupied Iraq in 1917 and gave it political independence in 1927 but kept troops there to protect its oil interests.

Engraving on the recovered machine-gun shows it was made by General Motors at its Michigan steering gear works, said Roberta Beverly of the Union Station Foundation. She said she hasn’t had time yet to chase down its history through the serial number.

Diana Azevedo, who manages machine-gun displays at the museum, said the weapon will be displayed to play up the story if its discovery by the troops who determined they wanted it to go to a museum.

Lovejoy said that, as a soldier, he has great admiration for the Browning M1919A4. An upsized version, the M2 that uses .50-calibre bullets, is still in use today.

“Every war after (John Browning) invented it, that’s our primary weapon,” Lovejoy said. “Without that weapon, a lot more lives would have been lost.”