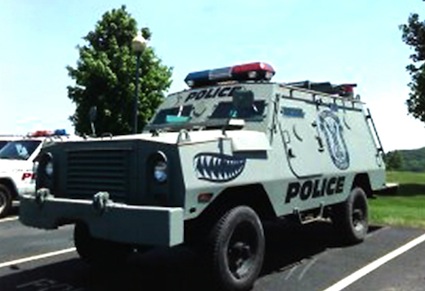 Money and belongings seized from drug dealers will fund the purchase of a new armored vehicle for the York County Quick Response Team, a tactical team sent into the county’s most dangerous police situations.

York County Commissioners on Wednesday unanimously approved spending about $296,000 from the Drug Task Force so the QRT can lease to purchase a Lenco Bearcat Armored Vehicle.

The team, made up of specially trained officers from departments across the county, currently relies on a 1976 Peacekeeper Armored Vehicle for transportation from its command post to the site of an incident in the field, said Springettsbury Township Police Chief David Eshbach, a founder of the team.

Originally bought as U.S. Army surplus, the Peacekeeper is outdated and has been refurbished several times, Eshbach said.

In addition to the benefits of modern technology and better armor, the new Bearcat will be easier for team members — who wear about 40 pounds of equipment in the field — to enter and exit, he said.

The Peacekeeper is configured in such a way that officers must step up and crawl in, but the inside of the Bearcat is easier to access, he said. The new vehicle will also be more “bulletproof” than its predecessor, he said.

It can carry as many as 12 police officers, about twice the number of the Peacekeeper.

The vehicle is used when the team is called to high-risk situations, such as executing search warrants issued against dangerous drug dealers who may have guns or other weapons, he said.

It could also be used to rescue a downed officer or civilian while police are under fire, or to push through or pull off doors during, for example, a hostage situation, Eshbach said.

Photo: The York Dispatch Money and belongings seized from drug dealers will fund the…