Trying to find logic in the fascination many 21st century people have with ancient Japanese battle swords is an extremely difficult task. Even individuals with no special interest in conventional cutlery will stand in line to see Hollywood’s latest martial art fantasy of samurai battling ninja in the streets of a modern city. Not only that, but many will feel this has given them special insight on the construction and use of these classic Asian weapons.

The results of a morning of cutting tests. While alder saplings are not as hard as bamboo, they are also not hollow like the giant grass.

So why Japanese swords, over the hundreds of other styles that have been used around the world over the last 5,000 years or so? Obviously, the Japanese reputation for master craftsmanship and using superior materials to produce incredibly sharp, durable blades has something to do with it. Still, I personally have another theory those deep in the mystery of the Nippon blade may not like. 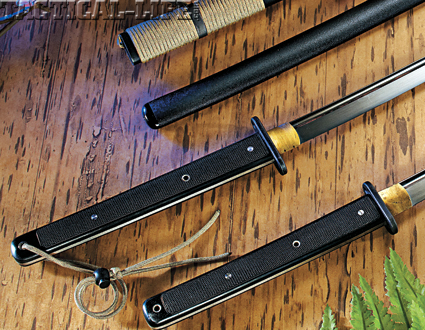 If you have ever handled a Spanish rapier or European small sword, you know they are all fairly useless in the hands of someone lacking years of dedicated training. Even more utilitarian weapons like the German long sword, Scottish claymore or the various cavalry blades of just about any European nation are not weapons that automatically feel natural in the hands of the amateur. Katana and wakizashi, on the other hand, were expertly designed to be the ultimate cutting weapons and they just seem to want to swing of their own free will. Even the totally untrained can easily and effectively use these weapons.