The day I received four sample Mantis knives to test and evaluate, it took me a matter of seconds to select my personal favorite. I was immediately drawn to the Mantis MT-7 Folding Pry because this model has one of my favorite knife blade designs, a partially serrated 3.5-inch blade with the Tanto-style tip. I also liked the ergonomics of the G10 handles. In fact, the Mantis Folding Pry has a hefty feel, which is something that some modern folding knives lack. 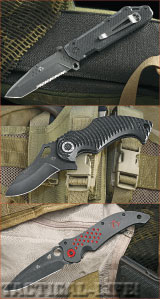 The Comfy Kunitza
My second favorite Mantis knife was the Kunitza. The MT-5 Kunitza is described by Mantis as being very curvaceous and ergonomic. In addition to this accurate albeit brief description, I would like to add that the Kunitza has an extremely effective textured handle that makes this knife feel as if the gripping surface has been wrapped in high-quality, off-road SUV/truck tires with an aggressive tread design. In fact, thanks to the 3D textured G10 handle, the Kunitza is one knife that will never leave your hand by accident. I also like the fact that you can tie a lanyard through the hole that is drilled in the bottom of the Kunitza’s G10 handle. Even though the Kunitza has an outstanding grip, it cannot hurt to be extra cautious and use a lanyard to prevent the loss of your knife in an emergency.

The major selling points of the Kunitza are a deeply cut 3D CNC machined G10 handle, a 440C stainless steel reinforced curved back strap that supports the handle and an incredibly sharp 154 CM steel 3-inch blade. Clearly, this knife can be just as effective in a justified use of deadly force situation whether you use the blade or the reinforced curved back strap of the Kunitza’s handle as a weapon. One friend of mine that examined the Kunitza (a retired SWAT cop and avid hunter) immediately took a liking to this unusual design and commented that the Kunitza would also make an excellent skinner. The bottom line is that the Kunitza is a substantial knife that fills my large-size hands with plenty of tactical fighting spirit.

If you ever have to use a knife to manufacture kindling for a fire or cut and shape saplings into a trap to catch animals, you will appreciate having a folding knife like the Kunitza in your survival kit. The Kunitza was also the most ergonomic and user-friendly when it was necessary to bear down and put some pressure on the blade to complete a more difficult cutting chore. In addition to having a large textured handle that is very ergonomic, the Kunitza has a thumb rest built into the top of the handle and a second thumb rest built on top of the blade.

Duty-Ready Chaos
My first impression of the MTF-4ti Chaos Folder was that this knife was ready for some heavy usage. This knife looks as if it is easily capable of being used to cut through heavy wooden ammunition crates without sustaining so much as a scratch. The Chaos is ready for hardcore duty because it’s made with a titanium liner, an S30v blade steel, independent G10 handles and 440C socket head cap screws. It is based on the design of the fixed-blade Chaos II. From an artistic perspective, the Mantis Knife Company designed the profile of the Chaos Folder’s G10 handle to look like the skyline of a major metropolitan city that is filled with skyscrapers and long boulevards. Between the hefty G10 handle and the relatively thick “Tantoesque” 3.2-inch blade, the Chaos is a futuristic-looking edged weapon that looks as if it means business.

MT-6 M.L.E
The MT-6 M.L.E. is the law enforcement folder in the Mantis lineup. According to Mantis president Jared West, the inspiration for the M.L.E. design came from the Fullerton California Police Department, the Orange County Sheriff’s Office and the U.S. Border Patrol’s Chula Vista Station. Based on the suggestions made by Southern California law enforcement officers, Mantis designed the M.L.E. to be strong enough to stand up to the rigors of police work while having a very thin profile. Mantis delivered on the suggestions that were made and constructed the M.L.E. to be the knife that the troops in the field demand. It may in fact be the thinnest full-size folding knife that I have ever handled.

Even though I could live without the red painted accents, I ended up liking the M.L.E. a lot more as I continued to use it. In fact, by the time I started to put pen to paper to write this article, I found myself taking period breaks so I could repeatedly snap its blade open. Even though I normally prefer folding knives with some heft, I found myself drawn to the M.L.E. because it has a razor sharp spear-point style, 3.5-inch blade. I also liked the fact that it has a thin, steel handle.

Of all the Mantis knives tested, the MT-6-M.L.E. and the Kunitza almost tied for second place. The only reason I felt compelled to rate the M.L.E. a close third-place favorite is because the super thin handle is hard to bear down on when you need to put some extra muscle behind certain cutting chores. This is the price you pay for using a super-thin knife with an incredibly thin handle. (Wearing a good pair of gloves can dramatically improve the ergonomics and make it easier to use a folding knife with a thin handle.)

Unless you intend to cut an enormous amount of kindling or shape a large number of tree branches into useful camp/survival items, I would have no problem carrying the M.L.E. folder into harm’s way instead of the Kunitza. In other words, in all other applications the M.L.E. should be just as useful as the Kunitza, providing your hand prefers a thin handle over a more robust handle.

I should also mention that the Kunitza, the Folding Pry and the Chaos Folder have an extension on the back of their blades that protrudes ever so slightly from the top rear portion of the handle when the blade is folded. When the operator needs or wants to deploy these knives in a hurry, all he has to do is press down on the tip of the blade extension that protrudes from the back of the handle while quickly snapping the knife open. When done correctly, this motion will swing the blade open all the way to the locking position. The Kunitza and the Chaos Folder also have reversible clips.

Team Testing
In order to see if other knife owners felt the same way that I did about Mantis knives, I drafted a few friends to serve on an ad hoc test team, including a retired cop who served in Iraq as a security contractor, a Probation Department surveillance officer, a former sheriff’s department lieutenant who now serves as a contract firearms and tactics instructor, two police supply sales representatives and a licensed firearms dealer and trainer. After inspecting each knife—some on several occasions—members of my test team stated for the record that they liked at least one of the Mantis knives. Some found several sample Mantis knives to be appealing.

Ironically, without any prodding on my behalf, members of my test team selected the Folding Pry as their favorite Mantis. As far as the other knives are concerned, my friends proved that we are buddies for a reason when they selected the Kunitza as their second-place-favorite Mantis product followed closely by the M.L.E. Folder then the Chaos Folder. During this T&E, one member of the test team affectionately called the Chaos Folder the Battlestar Galactica Knife because of the design of its handle.

Jared West is the founder and CEO of Mantis Knives. In my opinion, the smartest decision Jared West ever made was to provide incredibly generous warranty coverage for his products that covers every owner of a Mantis knife for the rest of eternity. Mantis maintains a “no questions asked” warranty policy for everyone who owns any of their products, including family members, friends and complete strangers who you sell or give your knife to at any time in the future. This type of warranty policy confirms that Mantis is the type of knife company that stands behind their products.