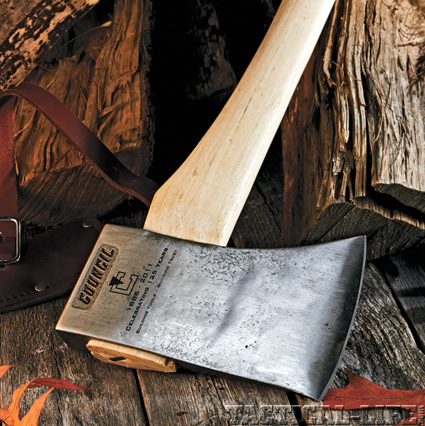 The drop hammer used to produce each axe head has a ram with a falling weight of around 3,500 pounds to drop-forge the 5160 carbon steel. The axe is then hand-finished by longtime Council workers into a premium-grade axe.

Knowing I have worked in the timber industry, I get asked fairly frequently what kind of axes “real lumberjacks” use. The most honest answer I can give anyone is that the chainsaw made axes obsolete among the professionals back in the 1950s. With the exception of the state-mandated forestry fire tool boxes, a few used to knock small limbs off loaded logs, and the single-bit “falling axes” used by cutters to drive plastic wedges, axes see very little use in the woods. When you combine that with the massive urbanization of the country and the decrease in the use of wood for home heating, it is not too surprising that axe manufacturers started falling on hard times around 1960. One by one they closed their doors or moved overseas to keep costs down. While the average “5-acre ranchette” owner probably has an axe of some kind in his garage, it is seldom used and its quality is often very questionable. Still, there is a growing number of serious outdoorsmen who appreciate the value of a quality axe made from first-class steel, just as they do their knives.

Swede Boutique Axes
As the number of quality axe makers around the world shrank, the Swedes seem to have found a marketing opportunity. At least one Swedish company has stated they had two choices, close their doors or start producing a more limited number of high-end handmade tools. Before long, a couple of these companies had pretty much cornered the axe market with the bushcrafters, wilderness trekker and survival camper crowd. 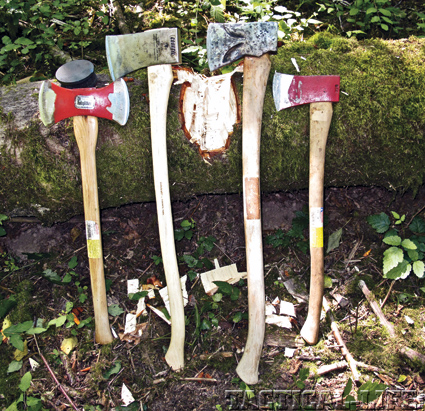 I’ve been using Council axes for many years. Left to right: a Council double-bit “cruiser,” the new Velvicut Premium, a “Jersey” pattern I have been using for maybe 20 years, and a smaller ¾ campers or “boys” axe. None of these tools has ever failed to start when I needed it. Wish I could say that about my chainsaws.

Back in the U.S.A., the number of axe makers continued to shrink until there was basically only one full-line company left: Council Tool, established 1886 and still owned by the Council family, in North Carolina. As an ex-forester, I’ve used a lot of Council axes, Pulaski fire tools, and grub hoes on timber burns over the years. All have been plain jane working tools of good quality and reasonable price. That is especially true when you compare them to some of the bulk Chinese fire tools I see being sold by the shipping container box rather than individually.

Council Quality
Of course, it wasn’t lost on Council that the Swedes were doing very well selling handcraft axes. They also felt there was no reason they too couldn’t produce a premium quality chopper made of a higher grade of steel than their basic models. Recently, Council released the first of its “Heritage” axes—the Velvicut. This axe has a 4-pound Dayton-pattern head and is drop-forged (Rockwell 50-54) from 5160 carbon steel on a 36-inch straight-grain hickory handle. “Velvicut” actually stands for “velvet cut” and was copyrighted by Council in 1962 for their top-of-the-line axes. The Dayton single-bit axe head is one of the few common styles still remaining from the days when every region of the country had their own special pattern. Each axe also comes with a very nice leather headcover and, of course, the axe and sheath are made in the U.S.A.—not Sweden or China.