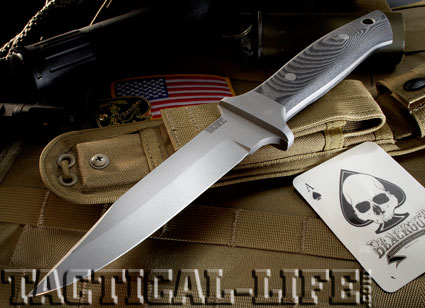 Some years ago the late Chuck Karwan introduced me to a very talented Oregon knifemaker named Steve Huey. The maker’s knives are well known for being no-nonsense, hard-working tools that will perform under the most extreme conditions. Recently, I learned that Steve had been commissioned to make a distinctive combat knife for a Green Beret “A” Team attached to a Special Forces group I was asked not to disclose. This particular group of operators is carrying out classified missions in one of the current theaters of the war on terror. 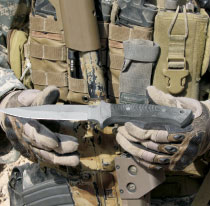 The knife, which Huey calls the “Airborne Delux,” came about when the A team wanted to have a knife to honor its detachment member’s service in the GWOT (Global War On Terror). The knife would be purchased from a team fund and presented to an individual when he had completed set criteria for issue. One of the detachment members grew up knowing Steve Huey and turned to him to design and make the knife. The idea was to have something along the lines of the famous Randall Model One, and that it would be a fully capable combat knife. During my own military service we also had presentation knives, but a lot of them were just “wall hangers.” This is not the case with Huey’s knife; it is a tough, tactical combat knife, the kind that you could buy early in your military career and carry for many years.

Airborne Delux Arrives
The Airborne Delux has a 6-¼-inch, clip-pointed blade of CPM 154 (RC 61). The blade is 7/32 of an inch thick, 1-3/16-inch wide and is bead blasted to give it a dull, non-reflecting surface. You can imagine in the current theaters of war how far a glint off a shiny blade might be seen. The handle is black/gray Micarta that is 5-1/4 inches long, 1-1/8-inch wide and ¾-inch thick, with a lanyard hole in the butt. The tang is tapered at the rear and the weight of the knife is about 12-3/4 ounces.

The Blackhawk sheath is OD ballistic nylon, with a plastic liner to ensure the knife does not penetrate the sheath. It has a horizontal retention strap, numerous attachment points, a leg tie-down and a pouch on the front big enough to carry a multi-tool or a diamond hone. The clever way it is designed allows it to be used by either a left- or right-handed individual. The weight of the sheath is 6 ounces.

Knife Impressions
I wore the Airborne Delux on my trouser belt, where it rode comfortably and securely. It was easy to access and re-sheath the knife, and it is a quiet sheath, in that the ballistic nylon covering the hard plastic liner reduces any sound made, as when your rifle butt hits the sheath.

The Airborne Delux would cleanly cut paper when I received it, but its edge is still thick enough to take a lot of abuse. For instance, one SF soldier told me that he used his knife to dig a hole through a sun-baked mud wall about 18 inches thick so they could install a woodstove chimney. Chopping points on the end of branches to make fire stakes presented no challenge, nor did just carving the stakes to a sharp point. Although I used the Airborne Delux for long periods of time, chopping and hacking away at branches and my ever-growing blackberry patch, I experienced no hot spots or discomfort from the handle. It provided a safe, secure and comfortable grip no matter how I used it. The angle of the rear of the butt makes for an excellent non-lethal striking point when used against arms or hands, but would inflict a serious injury if used against a skull. Speaking of blackberry bushes, I was able to cleanly cut through thin blackberry branches with just a flick of the wrist, an indication of good blade geometry and edge sharpness.

Next, it was time to start a fire using Tandy paper and a Swedish Army fire stick. Again, this was no problem; the Airborne Delux threw plenty of sparks, quickly igniting the Tandy paper (www.lightingpaper.com) and then the feathered branch. Cutting the end out of a coffee can took just under a minute. After finishing these two tasks, I examined the edge of the Airborne Delux with a magnifying glass and found no evidence of any damage on the edge.

When the knife started to lose its edge, it only took a few quick passes across a medium grit diamond hone to bring it back. Some people have suggested you should be able to sharpen your combat knife with a stone you pick up from a riverbank. I think, given the hardness of modern steels and the wide availability of diamond hones on the market, why bother? I carried a diamond hone for many years while on active duty, and still travel with one. They are light, easy to use, and allow you to get and maintain a great edge with little effort, and add very little weight to your combat load.

The Utility Airborne
Huey sent along a second knife for me to look at and got my interest up when he told me that it was one that Chuck Karwan had especially liked. Looking at this knife, you can easily see its heritage; basically, it is a smaller version of the Airborne Delux with a few subtle differences. First, the blade is only 5-1/2 inches long; the blade is a little thinner and the tang is more tapered than the Airborne Delux. The handle is 4-7/8 inches long and 5/8-inch thick; total weight of the Utility model is 9-1/2 ounces. It also comes with a Blackhawk sheath, with the one submitted for the article being desert tan. There is more belly to the blade up front, but it does have the gently curved ricasso, again allowing you to chock up for better control.

In all other aspects it is the same as the Airborne Delux: bead blasted blade, Micarta grips, lanyard hole and eminently practical for a hard use field or combat knife. I did not get to spend as much time with the Utility Model due to my travel schedule, but what tasks I did get to use it for proved to me that it would be equally at home on the belt of a combat soldier. I can see why Chuck liked this knife.

I was impressed with Huey’s level of execution on both the Airborne Delux ($350) and the 5-1/2-inch Utility Model ($325). The fit and grinds and ergonomics were all outstanding. Both knives would handle any combat tasks that I am aware of without a problem, as well as being just plain useful for those everyday tasks that we call on our knives to do. One thing I know for sure about Special Forces soldiers is that they do not suffer fools or bad gear lightly, so it says a lot that they went to Steve Huey to have a knife made and continue to go back to him for more knives. While you may not be heading off to combat, you can still appreciate owning and using a knife that meets the approval of combat-hardened soldiers. 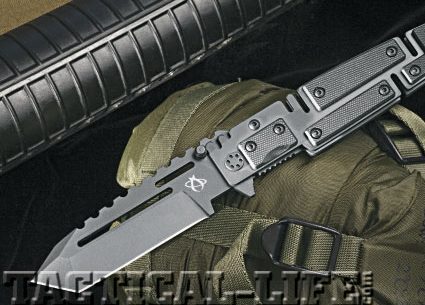