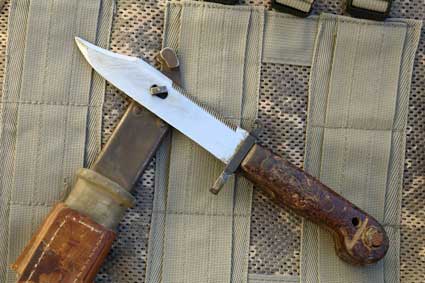 According to Martin Ivie’s book, Kalashnikov Bayonets-The Collector’s Guide to Bayonets for the AK and its Variations, the Russians adopted their first “wire cutter” bayonet when they switched from the original AK-47 to the stamped receiver AKM-47 in 1959. Despite the bayonet having been standard issue for most of the 1960’s, the first time I became aware of its existence was while I was in Recon Commando School at Nha Trang, Vietnam, in 1968. The Special Forces unit that ran the school had one of the weapons on display in a collection of captured enemy equipment. Given the school was run by a classified SF “Greek” project, I probably shouldn’t have been surprised that I wasn’t able to discover where the bayonet had been captured. Naturally, I had high hopes of capturing a wire cutter bayonet for my own collection, but that one weapon was the only example I saw during my tour of duty. I’ve also never heard of anyone else that saw one in Vietnam. All of which makes me wonder if the Recon Commando school bayonet came off a non-Viet “advisor” over the fence in Laos, Cambodia, or maybe even North Vietnam.

Birth of the AKM-47
The basic AKM-47 bayonet consists of a Bowie pointed blade 152 mm (roughly 6 inches) long, with a one-sided chisel-edge grind and shallow serrations along the spine of the opposite side. A hole near the point of the blade mates with a lug on the scabbard to form a wire cutter. This feature was later copied onto the standard U.S. issue M9 bayonet for the M16 family of rifles, right down to the totally useless serrations on the blade.

According to Martin Ivie’s book, Kalashnikov Bayonets-The Collector’s Guide to Bayonets for the AK…