Having spent a good part of the last dozen years in the midst of a tropical jungle, I’ve learned that pretty much all you need to get by and travel comfortably is a good machete, a mosquito net and maybe a poncho. With that said, tropical rainforests are excellent testing grounds for sharp edges, so it would be a shame for a knife writer to limit his tools to only a machete. So,

when Holland’s BNN Productions contacted us to train their film crew in jungle survival for an upcoming TV show, you can bet I was thinking of more than just a cheap machete as my primary survival tool three degrees below the equator.

Before I get into the knives, let me give you a little background on how we test gear. On any trip that we’re testing equipment, we pass the gear around so each team member has a chance to give feedback on a particular design. On this trip we had Reuben Bolieu helping us with the knife testing. When it comes to actually going and doing, Reuben has made quite the name for himself and is probably one of the best outdoorsmen I’ve run across. So to give credit where credit is due, while I was training the BNN film crew on camera, Reuben was also testing a lot of the knives mentioned here while working with indigenous cultures of the area, building traps and snares, constructing shelters and making a lot of fires—one of the hardest things to do in a wet jungle.

SOG Trident
Immediately after landing in Iquitos, Peru, the first knife to come out of my pack and into my pocket was a SOG Trident tanto. Now, it’s no secret that I’m not a fan of tanto points for bush work, but for bumming around town, deep pocket concealed carry, and as a general utility knife, the SOG is as good as it gets. I really like the lightweight features and secure lockup. And while I’m not a fan of assisted-opening knives, the Trident does feature a safety to keep it from accidentally popping open should you hang the thumb stud on your pocket (I’ve done that many times with other folders).

The Trident’s cord cutter is also a great feature and during the first couple of days of the survival school, it got plenty of use on paracord. The knife also came in handy opening cans and slicing lunchmeat during a training day lunch break in the jungle. All in all, I have a high regard for this knife when it comes to an all-around utility pocket folder. But that should come as no surprise since I’m a real fan of SOG knives and multi-tools in general. My only suggestion for outdoorsmen considering a SOG Trident would be to get the model that has belly in the blade instead of the tanto, especially if most of your time will be spent in the woods.

Blade-Tech PH Magnum
In my years of using folders in the jungle, when it comes to the Blade-Tech PH Magnum, I have to say this is probably as close to perfect as it gets when it comes to what we do. The Magnum slices through gator meat as effortlessly as it whittles fuzz sticks and snap-cuts larger saplings with the efficiency of a blade half as thick. And while most “survivalists” may disagree, I think the simple liner lock is as good as any lock in the hands of an experienced bushcrafter. I could probably stop my review right here and not say anything else; it’s just that good, but I’m sure everyone wants to know why I feel that way.

First of all, the PH Magnum was obviously designed by a real knife user and not some desk jockey who thinks he knows what an outdoorsman needs. For those who don’t know Tim Wegner (President of Blade-Tech), he’s not just another knife company owner. Tim’s heart is in the bush, not behind a desk. That’s obvious, since he spends a good portion of his life in the wild backcountry. He’s had a lot of time behind the knife when it comes to big game and his knives prove it. Simply gripping the PH Magnum puts every finger in the correct position. Choke up on the knife in the skinning position, and the middle finger rests comfortably on the grip surface behind the choil, with the index finger resting on a grip surface towards the point of the blade. In other words, you now have absolute and precise control even when the blood and body fluids start contaminating your grip.

The next notable feature is its open-post design. Again, designed by a man that’s “been there, done that” in the bush. Cleaning a folder in the wilds means swishing it around in the river or creek, not cleaning it with compressed air or a toothbrush. So, you have to have an open-post design to do that. The Magnum came absolutely shaving sharp and was simple to maintain in the jungle. It also features a four-way clip position that should be standard equipment on any folding knife, in my opinion. And while the Magnum boasts an excellent S30V blade, I would be just as happy with 440C. On the other hand, orange G10 handles are the way to go if most of the time on your trips is spent in tough undergrowth. Buy this knife; you won’t be disappointed.

KA-BAR/Becker BK11
You might say that Ethan Becker is a man that legends are made of in our world. Not only is he “famous” for his “Joy of Cooking” cookbook, the Becker Patrol pack, the CMI Figure 8 Rappelling device and numerous other pieces of outdoor gear, but he’s also legendary in the knife world. In fact, Ethan has dedicated most of his life to “building a better mousetrap” and due to that, we have been the beneficiaries of some great knife designs over the years. Now, couple that experience with his new home at KA-BAR and you have the makings of something huge!

I was lucky enough to take Ethan’s personal prototype of the new KA-BAR BK11 (AKA “Becker Necker”) to the jungle with us. The first day out the little knife was used for about an hour digging in the dirt for fishing worms. It was also used along the banks of the Itaya River to fashion a makeshift fishing pole. With its ambidextrous molded sheath, it’s a handy package for cutting vines, making fires, slicing up jungle fruit/palm hearts and other general survival use (all of which it performed during the week-long jungle adventure). It also held its own opening up Peruvian beer bottles after the survival class was over.

The BK11, coupled with a machete, is all that anyone would ever need to survive in any jungle. Having owned the older Becker Neck Knife (pre-KA-BAR), I can say this design is time tested and well deserving of its reputation—there’s just no downside to owning this knife. The only suggestion I have is to offer it in easy-to-find bright colors, such as orange, pink, or light tan.

Blind Horse Knives Work Horse
This is the only belt knife covered in this article. I ran into L.T. Wright and Dan Coppins, owners of Blind Horse Knives, at a large knife show and was very impressed with their simple grinds and basic designs. In my opinion, knives of this caliber are much more capable and useable than the fancy gizmos that set out to “revolutionize” the knife industry.

The #141 Work Horse we used featured D2 steel that’s been triple tempered and run through a cryo process. The 58-60 Rc edge held up well without any re-sharpening during the trip. Since it was the largest of the four knives taken, the #141 did most of the fire-building chores and took quite a bit of abuse from being batoned through tough jungle deadfall. In my opinion, the 5/32-inch thickness is the perfect compromise between efficiency and toughness when it comes to a belt knife. Even after all the fire building for the week, the #141 sliced up fresh alligator meat like a greased straight razor. I guess the easiest way to describe the #141 is simply that it works very well, and is all you could ever ask for in a good belt-knife design. The orange G10 slabs are very comfortable and replaceable with other colors.

If I had to complain about anything with this knife, it would be the lanyard and the sheath. The lanyard had to be removed after the first day in the jungle. Belt knives with lanyards in pouch sheaths don’t do well in heavy brush. The secondary jungle grabbed the #141’s lanyard about 400 meters in, stripping it right out of the sheath. Luckily, the bright orange handles gave up the knife’s hiding place or I would have had a devil of a time finding it in the undergrowth. The provided leather pouch sheath seemed to fit a little bit loose around the knife, so that would be the one improvement I would want before taking it as my primary survival knife in deep jungle. I would also make a lanyard hole in the knife that the user could feed a cord into and remove without having to remove the handle scales (handle pinches around the hidden lanyard hole). This way the user could attach a lanyard while working around rivers and creeks, and then remove it when hiking through heavy brush capable of grabbing the knife. Other than that, the Blind Horse Work Horse is a great outdoors knife with excellent attention to quality and detail.

As mentioned in the beginning of this article, you can get by in a jungle with nothing more than a machete, but it sure is nice to also have a small cutting tool to assist the machete or act as an emergency backup. Our friends with BNN Productions found this out during the taping of their TV show. After we trained them in jungle survival, we inserted them into the jungle and left them to get out on their own (as they had requested). We gave them a machete and a survival vest that included a mosquito net, poncho, sheath knife, compass and pocket survival kit. Less than 2 kilometers into the course, the star of the show fell into a creek and lost his machete. After gathering his senses, he remembered his training and resorted to a beater stick and smaller knife to make it though the remainder of the course. 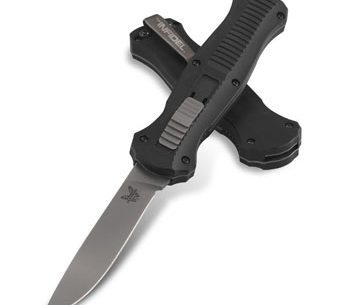 Benchmade adding the following automatic and assisted-opening knives to its product line for 2009.