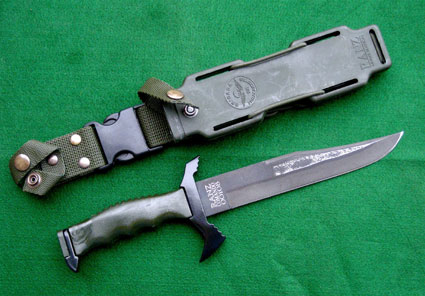 The term “commando” has been used to designate various units within the Argentine armed forces, including some Marine Commandos who fought during the Falklands War. Currently, two Army Commando units—the 601st Commando Company and the 602nd Commando Company—are part of the Argentine Special Operations Forces Group. The units are assigned typical commando missions including raids, recon and counterinsurgency. Because Argentina has very diverse terrain, the Commando companies are trained for jungle, mountain and desert warfare.

As befits an elite Commando unit, the Argentine Commandos have a distinctive combat knife made by Jose Ranz. Designated the MXT-V1, this Bowie-type knife seems to be well made and functional. As I understand it, Jose Ranz specifically designed the knife for the two Commando companies. My knife is new and did not come from contacts in the armed forces. I believe it was part of an overrun of the original contract. One indication of this is that it did not come in the original sheath used by the commandos but in the sheath supplied by Ranz with the knife they supply to the Argentine Parachute Brigade. I have seen figures that indicate only about 150 of the Commando knives were produced, but I do not know if this is correct.

Elite Features
The Ranz knife has a distinctive appearance, which is a positive feature for a knife used by elite military units, but it also seems to be a relatively practical heavy-duty blade. It’s a good-sized Bowie-type knife, which should be usable by troops that have a mountain mission where cutting branches or other camp chores are likely to arise. Quality of the Ranz Commando Knife seems good, but the fitting of the crossguard with the handle could be better. There is a noticeable gap between the blade, crossguard, and handle. The Argentine Commando Knife is 13.2 inches overall. The blade is SAE 9260 carbon steel with a hardness of HRC 56-58. It is 7.5 inches long and .16 inches thick with a clip point. Finish seems to be parkerized. On the ricasso, the blade is marked “RANZ/COMMANDO/00108.”

The handle is of PA 6 Polyamide and is green with finger grooves on one side and ribs on the top. This is actually a very comfortable handle which, combined with the blade, gives the Ranz Commando excellent balance. The crossguard is of distinctive shape and fabricated of aluminum, which is painted black. The hilt incorporates a distinctive beak which, combined with the crossguard’s shape, indicates to me that it may have been inspired by previous Argentine designs which have a knuckle guard. The Ranz knife almost appears to have been a knuckle knife that has had the center section sawed out. To some extent it resembles a Commando knife a friend in the British Royal Marines captured from Argentine Commandos during the Falklands War. The blade is similar in shape and that knife does have a thick crossguard and a knuckleguard. The crossguard and hilt beak are nicely finished and certainly don’t appear to have any material removed, but one’s eye just fills in the arc of a knuckleguard when looking at the knife.

As I mentioned earlier, the sheath does not seem to be the correct one for the Commando Knife but is the one supplied by Ranz with Argentine Airborne knives. The blade fits quite nicely, though, so other than the “Paracaidistas” markings, one would never know it’s the wrong sheath. It may well be that the same or a similar blade is used on the airborne knife—I have seen photos of a knife designated as an Argentine para knife made by Ranz, which has a blade of the same width and length but with a spear point and serrations on one edge. This knife does incorporate a knuckleguard. The handle of the Commando Knife is green as is the sheath, which, with the black crossguard and black pommel beak topped off with a green pommel cap, makes a nice contrast when the knife is sheathed. The polymer sheath does offer good friction retention plus has a snap-retention strap that passes over the crossguard and another snap-retention strap at the hilt.

The polymer sheath incorporates four strap loops as well as a lashing slot at the bottom. Additionally, the woven carry loop riveted to the back of the sheath may be used as a belt loop. A green leg-tie cord comes attached to the lashing slot on the sheath. Balance is good and I like the feel of the handle. Since Cordoba, where Ranz Armas Blancas is based, is the center of the Argentine aerospace and automobile industry, one would assume that skilled workers should be available to allow production of quality blades.

Time To Dig Deeper
I guess the bottom line is that I like the knife but wish a little more time had been taken on fitting. I would like to know what the original sheath was like, too. I remember a photo of an Argentine Commando wearing what could have been the Ranz knife with a leather sheath that was squared off at the bottom. Interestingly, I found a Spanish language blade forum where there was a discussion of the Ranz military knives. Many Argentine collectors seemed to be having as much trouble finding info or even finding Ranz as I had when working on this column!