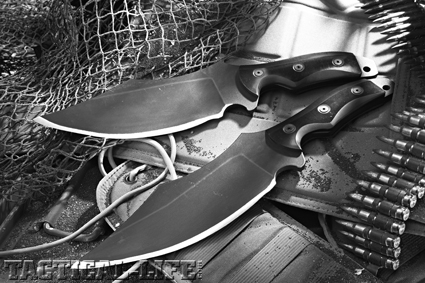 If you’re a regular reader of this magazine, you probably already know what I mean when I talk about a knife being a “safe queen.” I suspect most of us have at least one knife, if not multiples, that are just too pretty, or that cost too much, for us to really take out and use. Now, in many ways this defeats the purpose of owning a knife, which is, at its heart, man’s oldest tool! Still, there’s a certain understandable twinge we get when we put that first scratch on a new knife and that hesitation to really take out and bang up something that just seems too pretty to use.

Enter “Mike” and Grayman Knives. Mike makes user knives for people who need tools, not showpieces. Not that there’s anything wrong with having those “safe queens” around, but if you want a hard-use knife to take to the field with you and not just to show your buddies back in your den at home, then you might want to check out a Grayman or two.

Mike has a pretty colorful history and has spent considerable time overseas in primitive areas of Africa and Asia. It was in these areas that he gained a good appreciation for big heavy duty knives and their utility as day-to-day tools. When you live and work under primitive conditions, your knife is no longer just a piece of secondary gear. Your knife becomes a mainstay tool that needs to do just about everything, especially when you can’t run to the local hardware store and pick up what you need for a job. About 15 years ago Mike started designing knives based upon his experiences. After about five years he started making his own blades so that he’d have more control over the field testing and be able to more readily apply feedback from his own use and that of his friends. Those knives made their rounds and other folks started asking for them. Before long, Mike was in the custom knife business. Initially, his business was limited to just military, law enforcement and security contractors, but over the past few years Mike’s opened up his sales to everyone. Still, and rightfully so, military and LEO’s receive top priority.

Grayman—Big and Tough!
Mike does all the grinding himself and his focus is on utility. He makes big, solid knives with thick spines that are meant to take abuse. He uses either full double-bevel grinds or high single-bevel grinds and keeps a relatively thick edge on them to withstand big cutting and chopping jobs. Mike even states that they’re fine for prying and batoning, which most other makers or companies won’t do. He fully realizes that while knife guys might consider this abusive, soldiers in the field, with a knife being their main and possibly only tool, are going to use them for all sorts of things they might not originally be intended for.

He’s got a great warranty policy, too. Free sharpening any time if you send it back to him, and if you break it (which he doubts will happen), he’ll either fix it or replace it right away. He’ll even refund your money if you just plain don’t like the knife for some reason. The warranty goes with the knife too, so if you find yourself in possession of a used Grayman, you’re still covered. You can’t really beat that for a warranty. 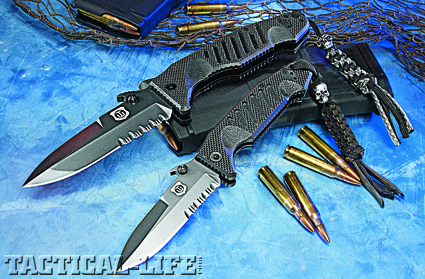