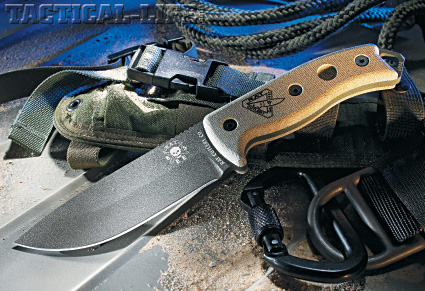 “SERE,” as most Tactical Knives readers are probably already aware, is the military abbreviation for “survival, escape, resistance and evasion” training. Most of us probably first heard the term back in the 1980’s when Al Mar Knives designed a large folder for the Army’s SERE program. Actually, all branches of the service now have their own survival programs with the Air Force school near Spokane, Washington being one of the more acclaimed. Pilots and air crew personnel are obviously much more likely to need this specialized training than the average infantry soldier.

The Bolt Knife
First designed by Marble’s Arms in 1957, the standard-issue cutting tool for SERE instruction has been the “pilot survival” (I understand the Air Force troops like to call it a “bolt knife” because of the large steel nut used for a pommel) sheath knife. While the pilot survival is inexpensive and widely available, it does have a few flaws. Probably the two most glaring ones are that the point is rather fragile and the sheath is of poor quality for hard field use. Few military survival classes make it through a cycle without someone either breaking their knife or losing it out of the sheath during night maneuvers in rough terrain. With that in mind, it should probably come as no surprise that a small group of Air Force instructors approached Rat Cutlery to design a knife better suited to their needs.

The new RC-5 is the older RC-6 shortened about 1 inch, increased from .188-inch to .25-inch thick and changed to a narrower, saber ground edge. As with the issue knife, the RC-5 utilizes plain 1095 carbon steel for its blade. The sheath was also changed to a “jump safe,” heavy duty Eagle Industries Cordura nylon model with a hard liner, accessory pouch, and leg strap. I have been told this will be changed again in the near future to a Kydex version with the nylon sheath only offered as an option. A “glass breaker” point was added to the end of the blade tang and a small divot on the side of the linen Micarta handle scales creates a fire bow socket. Of course, the extra beefiness comes at a price. The new RC-5 tips the scales at 23 ounces in the sheath compared to the standard pilot survival’s 12 ounces. The RC-5 is available in black/plain edge, black/partially serrated, OD/plain edge or OD partially serrated. The suggested retail price runs around $130, depending on the source.

“SERE,” as most Tactical Knives readers are probably already aware, is the military abbreviation…