0
SHARES
1
VIEWS
Share on FacebookShare on Twitter
Harley-Davidson is the motorcycle American law enforcement relies on. The new HD/Benchmade Venom could very well become the folding knife they desire as well.

To most Americans, the name Harley-Davidson conjures up thoughts of well-built motorcycles with a long and storied history. To bikers, Harley-Davidson is potentially viewed as a lifestyle with complete loyalty to the brand, including accessories. Those who prefer Harleys have scant tolerance for anything else, much like Chevy versus Ford. This being the case, it should come as little surprise that Harley-Davidson also commissions Benchmade, one of the world’s most respected knife manufacturers, to build a series of tactical-grade knives under their logo. Their most recent addition is a robust folder that would be at home in the pocket or pack of a cop, soldier, Marine, motorcycle enthusiast or just good ole’ Joe Citizen.

The Benchmade Venom is an assisted-opening, spring-loaded folder with a 3.57-inch 440C stainless drop-point blade utilizing the “Optimizer” assist mechanism. The Optimizer system is a patented Benchmade mechanism that uses a torsion steel bar that runs the length of the handle. As the blade is closed, the spring is tensioned against the blade tang, and as the user opens the blade to a 30-degree angle, the spring bar is engaged and springs open the blade to its full length. This 30-degree angle maximizes end-user control over the blade. 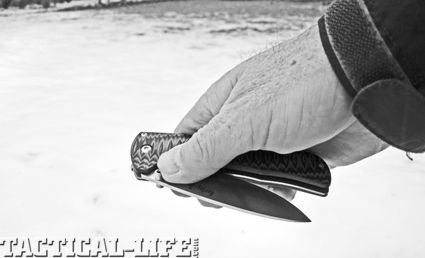 The Optimiser assist-opening system allows for the knife to be easily deployed, but the angle of opening maximizes end user control.

Carry Considerations
The Venom is designed to be worn point-down and I know this will be a deal breaker for some. Tip-up or tip-down is a bit like 9mm vs. .45—but it doesn’t have to be—as they both work just fine. I used to debate this with fellow knife enthusiasts, but I have come to realize that I can carry either way with equal ease as long as I don’t mix them up. I either carry tip-up or tip-down and I stick with it. It’s like carrying your holstered handgun on your strong-side one day and then cross-draw the next—if conflict comes your way and you need it in the pandemonium of a gunfight, lag time will result and it could cost you your life.