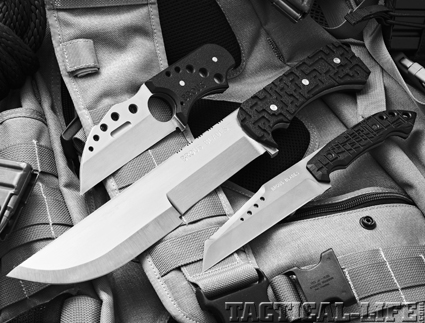 A CNC Machinist by trade in Santa Barbara, California, 23-year-old Jason Brous is an artist and innovator of custom knives. After several years as a knife collector, he started J. Brous Knives in early May 2010. Jason’s custom knife style has been described as modern and futuristic. Jason makes mostly fixed-blade designs using the stock removal method. A few different types of steel Jason uses are D2, CPM-154, 440C, ATS-34, and 1095 steels. For the best heat treat available in the industry, all of his blades go directly to the famous, Paul Bos. Jason’s ultimate goal is to create extraordinary knife designs that will make your jaw drop. 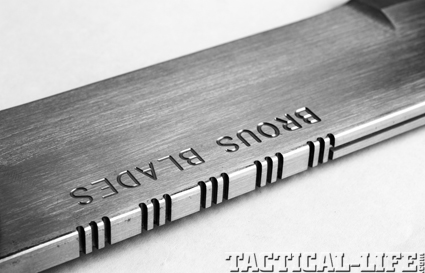 Yet another example of Jason Brous’s random creativity, and the small detail that makes his knives more than tools. Spine jimping is a common detail Jason likes to add to his work.

When I was first found out about Jason Brous’ knives, I thought they were otherworldly. Maybe it’s my affinity for movies that kicked my imagination into overdrive. To be quite honest, I thought his knives were out of this world, like something I would expect to see in the newest futuristic movie starring Will Smith. I had to know what made this guy tick and why the heck did his knives look like they came from the future. Shortly after contacting Jason, I asked him about his designs. “Basically what I’m trying to do is something creative and different, taking more of an ‘innovative artist route.’ Something that instantly stands out above the rest.”

When Jason originally got the idea to make a custom knife, the first thing he did was research. Instantly, he realized he had some serious competition. He knew that if he wanted to stand out, he would have to make something that really “popped.” Although he was a student of the arts, Jason chose to focus on music in high school. Eventually, he moved on to having a serious addiction to steel. Jason is a fourth generation machinist and the trade has taught him about the true meaning of quality. Combining his love for art with his skills as a machinist, he one day hopes to combine all his passions and become a well-respected knifemaker. 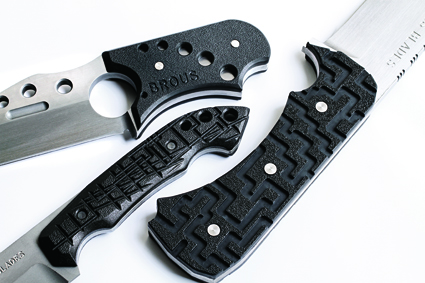 An array of patterns cut into the G10 scales. No one side of the handle is alike. Jason cut a slightly different pattern into each side. 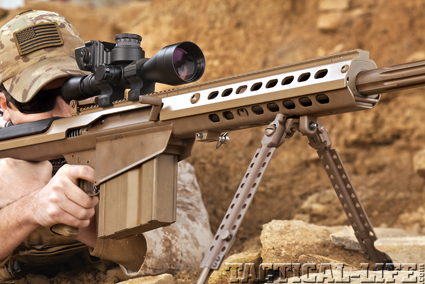