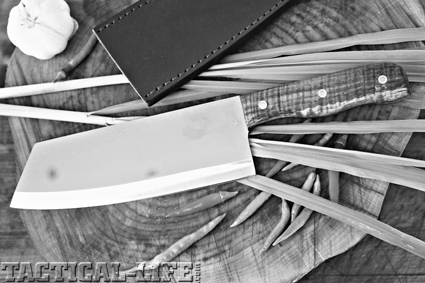 This TC Blades version from Tslil Censor in Israel was my first prototype. Unfortunately, the second prototype disappeared on its way from Beer Sheva to the U.S.

Attending Chef Sompon Nabnian’s Chiang Mai Thai Cookery School last year gave me a serious appreciation of the Kiwi cleaver style knife he used as his sole cutting tool in all of the classes. On the other hand, in my opinion the extreme thinness of the Kiwi blade made the knife less than idea for all round use. I actually found the knife would flex around a garlic clove when I tried to crush it with the flat side of the blade. While I didn’t want to sacrifice cutting efficiency, increasing the weight just enough to stiffen the blade up a little seemed highly desirable.

Given the Kiwi chef knives sell for around $5 each in Asian grocery stores around our area, it was a simple matter to buy several and ask various custom knife makers if they would consider using one as a pattern. A custom knifemaker in Israel, T.C. Blades, offered to take a shot at the project but his prototype wasn’t quite what I was looking for. I sent the first knife back to him only to have prototype No. 2 disappear in the mail someplace between Israel and my home. The knife has never turned up so I assume a customs agent on one side of the Atlantic or the other is enjoying it in their own kitchen.

Enter Blind Horse
I next approached Blind Horse Knives with the same request, simply copy the Kiwi in a slightly thicker steel. Blind Horse is probably better known for their outstanding bushcraft knife designs but they are very open to custom work too. A few months later the knife that I’m featuring in this issue showed up on my doorstep. Frankly, the handmade version worked out much better than I expected! The 1/16-inch thick spine makes this 440C stainless blade close to perfect. While that may seem relatively thin, it was just enough increase over the Kiwi to give the blade the exact stiffness I was looking for. The stabilized maple handle is also far more attractive and much smoother finished than the unknown tropical hardwood used on the Thai version. I was told they would probably be willing to make copies of my knife for around $120. 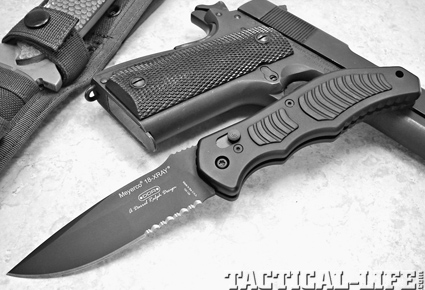