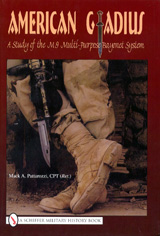 American Gladius—A Study of the M9 Multi-Purpose Bayonet System
By Mack A. Pattarozzi

It is hard to believe but the M-16 family of rifles and their bayonets are the longest serving infantry weapons in U.S. history. The focus of this book is the history of the M9 Multi-Purpose Bayonet adopted in 1986 to replace the M-7 bayonet. Pattarozzi covers the development project, including the other contenders for the contract, in detail. As with any long serving military weapon, the M9 itself has gone through a number of design changes and manufacturers. These include Phrobis, Buck, Lam-Cay and Ontario, with each bayonet being slightly different from the previous one. Collectors will find that the M9 is actually a very interesting specialty, with dozens of potential variations to discover.

The book also discusses the fact that Marines tested a few thousand M9’s for a brief period of time before deciding the bayonet wasn’t suited to their needs. At first it appeared they would be issuing a German Eickhorn design but protests by the American cutlery industry prevented this. The author seems to feel the primary virtue the Eickhorn held for the Marines was that it had an “Eagle, Globe and Anchor” cast into the handle grip! Eventually, the Marines settled on the Ontario OKC3S, a weapon I personally consider the finest bayonet currently being issued to any military group in the world.

Appendixes in the book include interesting chapters on the bayonet’s scabbard, GPS stainless steel pocketknife, and the history of the P38 can opener. No military knife reference library is going to be complete without a copy of this book. 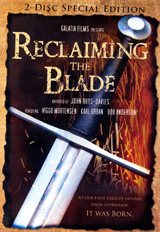 The basic premise of this DVD set is that there has been an emergence of a worldwide movement to reclaim the European sword-based martial arts of the Medieval and Renaissance periods. Hollywood has done an excellent job of convincing most people that only the Asians had sophisticated edged-weapons handling systems. As the conventional wisdom goes, Europeans were simply barbarians chopping on each other with sharpened iron bars. Reclaiming the Blade points out that, unlike the Asian systems, Europeans actually printed detailed training manuals that give us a very clear understanding of what they were capable of.

Reclaiming the Blade uses both outtakes from classic swashbuckler films and interviews with noted experts on antique edged weapons to illustrate their point. Like many sword fanciers, they also try to convince the viewer that facing an enemy with a long edged weapon is somehow more heroic than with modern infantry weapons. I suspect none have ever done either, as dismembering someone with a sword hardly sounds glamorous to me. Of course, movies seldom show the bloody reality of two medieval armies meeting with cold steel.

Despite my objections to their attempts to overly glamorize sword combat, I found the films to be very interesting. The second disk actually has some of the more educational chapters, including an hour of sword training videos, a sequence on forging a sword blade, a discussion of Oakshott’s classification of medieval swords, and a number of sections on production of the first disk.

Now I need to hunt down all of the old movies they mentioned! 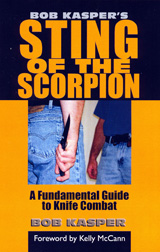 Sting of the Scorpion
By Bob Kasper

Longtime readers will probably remember the late Bob Kasper as having once edited our “Street Smarts” column. What most may not have known was that Bob was one of those people who was actually “going and doing.” Long before the current war on terror started, the group Kasper was associated with was carrying out covert operations around the world defending this country’s freedom. Let’s just say it made for some interesting Christmas cards from Bob.

Paladin’s new book covers Kasper’s knowledge on knife design, selection, carry and draw, and, more importantly, using the blade on the modern battlefield. As one of the founders of the Gung-Ho Chuan Association, Kasper’s techniques were all thoroughly tested and battle proven. There is a never-ending debate in combative circles on the thrust versus the slash. Kasper states he was a firm believer in the effectiveness of the thrust over a slash for stopping fights but he doesn’t discount using the edge when presented with an opportunity. He also felt that the draw was the most important movement in knife combatives, as you often only have split seconds to react to an attack. Other chapters cover carry, movement and his own personal knife designs. Several of those designs are still being hand-crafted by Pat and Wes Crawford as well as Al Polkowski and Rob Patton. A final chapter covers the original drawings of many of these designs.

If you need a training manual by someone who worked off real life rather than theory, then this is the book for you. 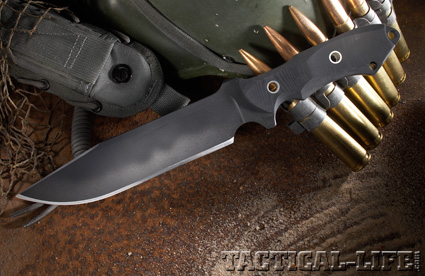