While this book primarily covers only the history the Wilkinson made Fairbairn/Sykes commando knives, the legendary sword company both designed and manufactured most of the early models. As a member of the Wilkinson family, the author has an insider’s knowledge of the evolution of what is probably the most famous fighting knife to be issued during WW II.

The book starts by dispelling some of the myths concerning early knives being ground from surplus bayonet blades and their connections to the “Shanghai daggers.” It then works its way through all the variations issued from November 1940 to the closing of the factory in 2005. I found it especially interesting that the highly desirable 3-inch guard version, commonly thought by collectors to be the first model, was never an issue weapon. No firm answer is given as to why the knives were actually made.

I was also amazed to find the company made a total of 163,656 knives during WW II! What makes this even more interesting is the fact they were not the only Sheffield company turning out commando knives. For many years, I have owned an early Fairbairn stamped “B2” on the guard. In reading Latham’s book, I found this was the mark of Birmingham Small Arms (BSA), a well-known maker of British military weapons and a major competitor for knife contracts.

Other interesting knives covered in the post-WW II section include a Falklands War model and a short, stout “Army Air Corp helicopter escape knife.” Various presentation and limited-edition collector pieces are also explained and illustrated. A must read for anyone interested in the history of military combat knives. 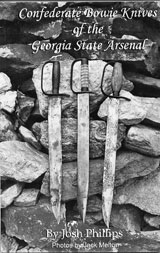 www.knifeworld.com
Confederate Bowie knives are a subject of much controversy in collecting circles. For starters, most were unmarked and of rather rough construction, which has long made them a favorite of fakers. In general, they were not finished to a set pattern so there are endless potential styles. This leads to knives from other periods and countries being misidentified as “Confederate.” One of the major exceptions to this rule are the large Bowies contracted for by the Georgia State Arsenal. Not only are they of relatively uniform pattern, there is good period documentation of their origin and many are still in excellent condition.

Of course, one reason many of these Bowies are still in such fine shape is that few soldiers were willing to carry them for long! In European armies, these Bowies would have been considered “infantry hangers,” a style of short-sword that had been deemed obsolete since the early 19th century.

The book gives an excellent history of the Georgia Bowie’s fabrication along with the belts and scabbards issued with them. When the Georgia arsenal was captured by Northern troops, many of the unissued knives were sent home by the victors as souvenirs. As a result, numerous examples remained in fine condition down to the present day. A full-color selection of the book displays a wide variety of these Yankee battle trophies.

While they were probably obsolete from the day they were forged, Georgia State Arsenal Bowies are a fascinating part of American history. 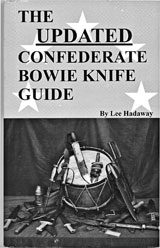 The original Confederate Bowie Knife Guide was first published back in 2005. The success of that reference work spawned the need for an updated second edition, which has more than doubled the original’s size. The black and white photographs have also been improved and many color photos have been added as well.

To keep things simple, author Lee Hadaway simply added his “update” to the end of the original text, with the thought that the first edition material was still just as valuable as when it was published. Aiming to provide the reader with some basic knowledge about what authentic Confederate Bowies should look like and how to spot the counterfeits, this portion of the book is straightforward and will get you off to a good start. In this regard, it’s definitely better than anything else heretofore published, as I know of more than one book on Confederate Bowies that are riddled with fakes and misidentified knives.

The first portion of the “update,” which spans about 125 pages, consists of a wide range of authentic Confederate D-guards and side knives, with a brief description of the knife’s provenance and maker when known. There are some truly superb knives illustrated here and some of the examples have never been identified in print before.

The book concludes the new section by illustrating knives that the author terms “Reproductions, Misidentified and Fake.” This is a great addition to the book, particularly because several of the knives shown can regularly be found at the gun shows or online auction sites, masquerading as the real thing. Hadaway’s decision to include these frauds, and illustrate authentic examples next to them when possible, should prove very beneficial to newbie collectors.

This isn’t a history of Bowie knives in general, but a guide to help collectors of Civil War knives avoid the pitfalls of that treacherous field. Those who enjoyed the original edition should not hesitate to add the updated version to their library, as should anyone with an interest in bowie knives that “whistle Dixie.”