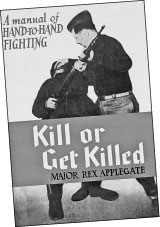 Kill or Get Killed: A Manual of Hand to Hand Fighting (1943 Edition)
By Major Rex Applegate

Kill or Get Killed by Major Rex Applegate has always been considered one of the most influential books on close-quarters combat ever published. As a friend of the late Colonel, I know from personal experience one of his proudest moments was when the U.S. Marines adopted an edition of this book as one of their official training manuals. Most readers are familiar only with the revised 1976 edition. Few have had the opportunity to study the extremely rare 1943 edition, written as America and its Allies were fighting desperately across Europe and in the Pacific.

Now, serious students of the evolution of modern battlefield skills have access to this combat classic. The original flap copy best captures the conception, spirit and intent of the book: “The grim reality of the present World War expressed in the title of this book is the best explanation for the fact that it has been written. Accepting as hard necessity the kind of war this is, there remains for us but one course: to be tougher and more dangerous than the enemy. This is not a book about ‘self-defense.’ It is a book about an increasingly important aspect of war as it exists today: offensive fighting at close quarters, with and without weapons. It is a book intended to be itself a weapon, a weapon to kill enemies and to save the lives of our own men that they may kill more enemies. That is what ‘total war’ means.” Like it or not this book covers the same challenges that our soldiers today face in the Middle East and beyond. 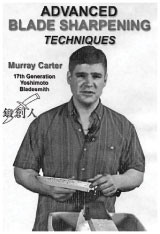 You have to hand it to Murray Carter; he isn’t afraid to think outside the box when it comes to knife sharpening. Who else sharpens knives on a concrete cinder block? On his second blade-care video he covers such interesting subjects as regrinding tanto points to remove the secondary bevel and grinding the serrations off a kitchen knife. Apparently, he doesn’t have much use for either tantos or serrated edges. I might suggest it would be easier to just not buy either blade style in the first place!
Murray uses a six-step sharpening procedure that literally produces a “shaving edge.” He proves that beyond a doubt by shaving his beard off on camera! He also covers his own views on the use of waterstones and the need or lack thereof for polishing sludge. In the chapter on repairing abused edges I was left wondering if his wife was really that hard on her knives or whether he had intentionally dinged up the blade. In any case, he soon had it back to razor keenness.

As anyone that has used one of Murray’s knives knows, he is a true expert on hand sharpening an edge. His second DVD picks up where the first left off and will teach you even more tips from the master. 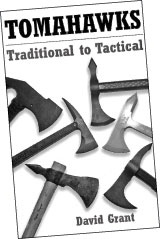 For centuries soldiers and woodsmen have armed themselves with the tomahawk, and for good reason. Its design is simple but extremely effective at both close and throwing ranges and it does double duty as a close-quarters weapon and a field tool. Tomahawks, Traditional to Tactical traces the evolution of the tomahawk as a modern tactical weapon. Though author David Grant examines historical and traditional designs, his primary focus is on the state-of-the-art tomahawks in common use today. I have to admit, I have been amazed at how popular tactical hawks have become in the last few years. The troops in Iraq seem to have found them very useful for forced entries during urban combat.

Grant uses his firsthand knowledge of hawks to analyze the contributions of tactical pioneer Peter LaGana, creator of the legendary Vietnam Tomahawk, as well as those of the best modern masters, including Wally Hayes, J. Neilson, Daniel Winkler and Kevin McClung, among others. Dozens of photographs showcase an amazing variety of tomahawk styles, including those offerings from American Tomahawk Company, Bear Mountain Tomahawks, Graham Brothers Knives, Ranger Knives, and RMJ Forge. An instructive chapter on choosing the best tomahawk for your needs and contact information for designers and manufacturers round out this indispensable guide.

This is probably the first book on the market covering the tactical hawk and it does it very well. 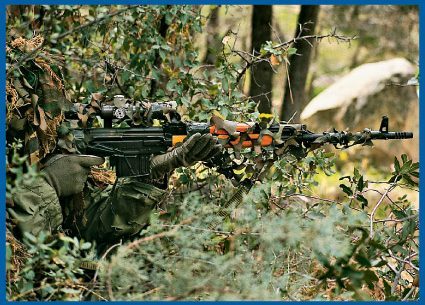 Kill or Get Killed: A Manual of Hand to Hand Fighting (1943 Edition) By…