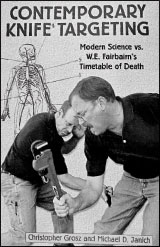 During the dark days of WW-II, British commando knife creator W.E. Fairbairn included a “timetable of death” chart in his classic hand-to-hand manual, “All-In Fighting.” Basically, this diagram divided the human body into vulnerable knife targets. Each target was assigned a specific amount of time required for a stab to render the enemy unconscious or dead. Many people in the combatives community have long questioned the accuracy of this timetable, as it really didn’t seem to correspond to their own field experience.

With the help of medical experts, “Contemporary Knife Targeting” analyzes Fairbairn’s work, human anatomy, and the realities of effective knife fighting. From author Michael Janich’s interviews with the late Col. Rex Applegate, the authors feel that the timetable was primarily intended to be a confidence builder for green troops that would be confronted with close, personal combat for the first time in their lives. There are many variables that the timetable simply doesn’t cover and, in general, it is way too optimistic.

The second half of the book concerns applying the lessons learned to more effective knife combatives. Attacking “structural” targets with cuts that will prevent the enemy from continuing an assault rather than Fairbairn’s thrusts are stressed. This is a well thought-out book that probably should have been written many years ago. 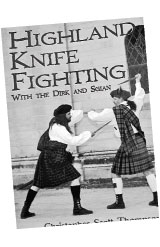 Probably no European culture is more associated with the use of a combat knife than the Scots and their “dirk.” The classic Scottish dirk in the pre-battle of Culloden (1746) period was actually more of a short-sword than a conventional knife. Many reached lengths well over a foot long.

Researching original material as closely as possible, the authors cover “guards,” “responding to an attack,” “Highland wrestling,” “knife against knife,” “going on the offensive,” and “exercises and drills.” Methods and positions for carrying both the dirk and “sgian” are also described. According to the authors, “sgian” means “knife” in Gaelic, whereas the common term “sgian dubh” is more properly a dress knife.

One gathers from this book that the Scottish dirk was most often used as a weapon of surprise to murder one’s enemies. As a result, many of the techniques involve over-hand stabs rather than fencing stances. The book includes a number of historical accounts where these same techniques were used for real.

The British victory in 1746 over the Jacobites pretty much ended the day of the dirk as an everyday weapon in Scotland, and many of the original methods for using it disappeared at that time. This is a very interesting book for those involved with re-creating the past. 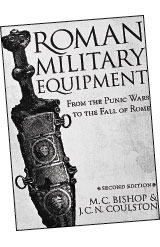 ROMAN MILITARY EQUIPMENT From the Punic Wars to The Fall of Rome Second Edition
By M.C Bishop and J.C.N Coulston

When I read any of the standard references on the Roman army, I’m always amazed by how “modern” an organization they actually were. Up to relatively recent times, most armies usually had their weapons and equipment supplied by the fighter himself as he reported for duty. The Romans, on the other hand, had government-owned weapons factories, arsenals, supply depots, and a well-organized quartermaster corps. As a result, their infantry equipment tended to be relatively uniform throughout all their units and successful weapons often remained standard issue for several hundred years.

Edged weapons were, of course, the primary infantry arms of the period. The most famous of these was what is commonly called a “gladius.” The book explains that this more accurately means “sword” in Latin. The standard Roman Legion gladius was a short, double-edged sword of around 20-22 inches in blade length. The Roman army reached a high point of around 60 legions of roughly 5000 men each. Assuming each soldier was issued a sword, this would mean there were a minimum of 300,000 gladius in the field at any one time. The book describes each of the more common variations of the short-sword; how it was made, and the quality of the steel used. There are also a wide variety of legion daggers described. Apparently, the dagger was a piece of equipment where the legionnaire was allowed to show his individuality and personal wealth. Most displayed highly ornamented sheaths and hilts carried on special belts mounted with precious metals. Naturally, there is also a broad range of spears, pilums, and armor described in the book. If there is a better book out there on Roman army equipment, I haven’t found it yet.