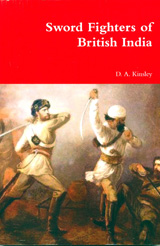 This book is actually one of the new wave of print-on-demand references, but I do not recommend trying to order from the publisher. Amazon is both far quicker and less expensive than Lulu.com. The author has put together a large number of personal accounts from British soldiers of their experiences in close combat with swords and other edged weapons during the Indian Rebellion of 1857. This was probably the last major war where swords played a serious part in the action before being replaced with revolvers and repeating rifles.

As always, the argument continued to be whether the point or the edge was most effective in mounted combat. It is interesting to note that one of the favorite swords of the Indian troops was the British Model 1796 Light Cavalry blade rehandled to local tastes. The critical point here was that the Indians took great pains to sharpen their weapons to razor keenness whereas the British had always used them in a semi-dull state. In fact, the British continued to argue pro and con on the need for sharpened swords in combat throughout the conflict.

If these accounts are any indication, there seems to be no doubt that the edge was more effective for mounted combat than the point. In fight after fight, British troops were chopped down by Indian swordsmen that had already been run through the body with a straight thrust. It really makes you wonder how effective modern combat knives would be in battle. On the other hand, it might again be an indication of the need for sharpening edged weapons to their full potential.

Along with personal accounts, the book is illustrated with a great collection of period military artwork. If there is one weakness here, it is that the author doesn’t offer detailed information or photos of the standard-issue British weapons. Other than that, I’d have to say it is probably the best book on 19th century sword use I’ve read. 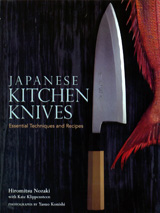 As every “foodie” knows, Japanese kitchen knives in both traditional and western patterns are rapidly replacing the classic European-made models with both gourmet and professional cooks. There are also said to be over 400 makers of kitchen knives currently working in Japan. Because of this, many thought Japanese Kitchen Knives, Essential Techniques and Recipes would be a milestone reference on the subject. What the book actually turned out to provide was a basic text on traditional, one-sided edge-grind Japanese kitchen knives and their use.

While the book does explain the standard three blade shapes—usuba, deba and yanagiba—there is little information on the many different makers and their ranking, quality wise. The primary focus of the book is actually the “techniques and recipes” side of the title. Given single-sided grind kitchen knives were created and are most useful for Japanese cuisine, the recipes are all from that country. The techniques shown are again primarily those used to clean and process Japanese vegetables and seafood.

There is a useful chapter on sharpening and stone maintenance as well as repairing damaged knives. The source list leaves a lot to be desired as most of the retailers listed are in Japan and do not have English language websites. I would recommend the book only if you are totally unfamiliar with Japanese kitchen cutlery or are looking for instructions on using a single-bevel knife. Hopefully, someone will translate into English some of the many other cutlery references available in Japan in the near future. 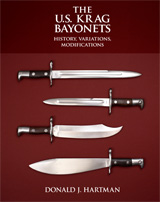 The Krag rifle bayonet has the distinction of being the first general issue “knife” bayonet in the U.S. military just as the “ United States Magazine Rifle, Caliber .30” was our first small bore, smokeless powder repeater. Along with use during the Spanish American war, it saw action in a number of “military interventions” by the U.S. at the end of the 19th century and the first few years of the 20th. Hartman’s book documents the research that went into adopting the standard model along with the later “cadet,” “Bowie” and “bolo” variations in superb detail.

The standard model was, in fact, copied off the issue Swiss bayonet of that period. Despite the fact the original specs suggested the bayonet should be a useful hand-held knife, the blade was given a relatively soft “spring temper” that made it unsuitable for taking and holding a cutting edge. The big surprise for me was how much attention was given to using the bayonet, combined with a metal cup, as a dual-purpose entrenching tool! The author documents field trial after field trail that forced the troops to dig fighting positions with their bayonet.

Looking at the Bowie and bolo versions of the Krag bayonet, you would assume the Army was trying to improve the performance of the weapon as a hand-held knife. Incredibly, the author explains that ordnance twice more produced unsharpened blades forged from soft spring steel. Two chapters of field reports document how both of these bayonets also failed the troops.

If there is anything I like, it is a detailed history of a specific weapon by an expert on the subject. When it comes to the Krag bayonet, Donald Hartman’s book fills that need perfectly.